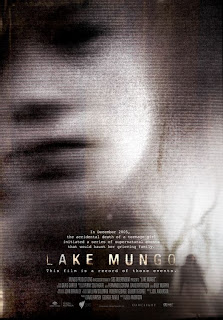 Lake Mungo has been on my horror radar for the last few months.  First one blogger talks about it, then another, then another.  A must see film, a horror film like no other, really scary.  Sign me up.  Lake Mungo delivers.  It had me weeping at the end, as well as turning on all the lights. 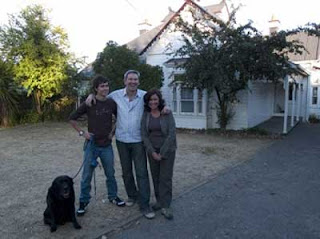 As I was watching this Australian film I couldn't help thinking of another one of my favorite Aussie movies, Peter Weir's Picnic at Hanging Rock.  Both films deal with not only the loss of a young life, but also the loss of innocence, or what we as adults want to believe is innocence.

Filmed in a faux Documentary style (one of my favorite storytelling devices) Lake Mungo tells the story of the Palmer family, a typical middle-class family trying to deal with the death of Alice, the 16 or 17 year old Daughter.  Alice drowned while on a family vacation, a pure accident.  Soon after her death, the family begins to feel that there is a presence in the house.  As they try to unravel the mystery of what might be haunting them, they also unravel the mystery of Alice herself.  Like Laura Palmer from Twin Peaks (an obvious influence here), Alice was a girl of many secrets.

The real story here is the often complicated relationship between Mothers and Daughters.  Unfinished business in life can translate into unfinished business in death.  I don't want to give to much away about this film, but it is this fact that had me in tears at the end.  Lake Mungo is hard to classify as horror, but it is. I was scared.  I was on the edge of my seat.  I will probably have nightmares tonight.  But like Picnic at Hanging Rock I will also have this hard to shake feeling of sadness.  If you are in the mood for a different kind of horror film, Lake Mungo is for you.  Just be prepared to live with it for a few days.
Posted by Jen at 7:44 PM

Lake Mungo is a great film. One of the best horror films I've seen this year.

I agree-it is awesome. More people have to see it.

This had perhaps the single most unsettling image in a horror film I've seen in ages. Kept reappearing to me at 3 am. Not cool! But yes, this is def one of the best horrors of late. The sadness is so palpable...