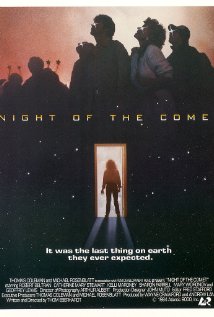 I was just flipping through the new issue of Vanity Fair (better articles than Vogue and I still get to enjoy fashion porn) and I noticed that the Eighties are back in a big way!  Shoulder pads, dramatic eye make-up, scrunchy boots, giant earrings, everyone looking like they are totally coked out: I love the Eighties.  It is not just the fashion that is making a comeback: all of the awesome eighties movies are being re-made.  Yes, all the remakes suck, but that is not going to stop me from seeing Footloose redux.  One of my favorite Eighties films, and one that contributed to my early horror obsession, was Night of the Comet.  This movie had such an impact on me I can still remember seeing the preview and begging my Mom to let me go see it.  I would like to say that I had an early preoccupation with post-apocalyptic horror, but the truth is I wanted to see the shopping mall scene. 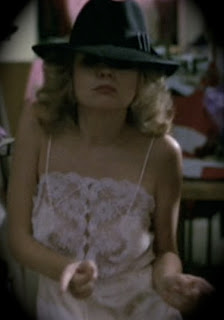 I swear to God the first thing I am going to do when the fit hits the shan, whether it be next year or twenty years from now, is hit the mall.  What girl wouldn't?  Unless I have a girlfriend as a fellow survivor, I might skip dancing around said mall to "Girls just want to have fun," but I am going and getting me some nice clothes!  If my future is toting a machine gun around and killing zombies, I am going to look good.  This is practical!

So it is 1984 and a big comet is scheduled to pass by Earth.  No one seems really worried that the last time this comet came around the dinosaurs went extinct.  It might all the coke.  Two Valley Girl sisters, Regina (Catherine Mary Stewart) and Samantha (Kelly Maroney) happen to spend that night in steel enclosures.  They are spared being turned into "red dust."  The comet basically wipes out all of humanity, save a few.  The sisters, who were raised as Army brats and know their way around a machine gun, soon find themselves fighting for their lives.  See, not everyone died.  Some turned into crazy-mixed up zombies. 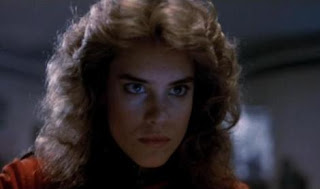 Not a crazy mixed-up Zombie 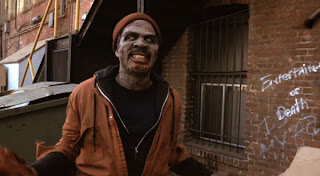 For sure a crazy mixed-up Zombie. 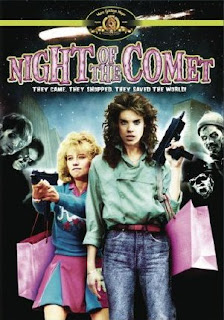 After getting ambushed by crazy mixed-up Zombies at the mall (after trying on fab clothes) the girls are rescued by a team of scientists who survived the disaster.  These scientists took every precaution to survive, except one: they forgot to close the air vents.  They are all slowly turning into Zombies and need the girl's blood for a serum.  Luckily, the girls know another survivor, the hunky Hector (Robert Beltran from Star Trek: Voyager nerds!) who helps them escape and they all live happily ever after with their shoulder pads and blue eyeshadow!  I just had a thought: if the world ended in the Eighties what happened with fashion?  Did they ever move on?  Not if it was up to these two girls.  They rock high waisted pants like no ones business!

Watching this film as an adult I was surprised at how much I enjoyed it.  I wouldn't say it stands the test of time, but it has some good scares and that amazing shopping mall scene.  This is not a "good" movie in any way, but neither is Mommie Dearest and I love that shit!  Now I have to go listen to the soundtrack to Pretty in Pink.  Good night!

Labels: Night of the Comet

For those who enjoy the film, there's a NIght of the Comet fan site at www.nightofthecomet.info