The Hound of the Baskervilles 1959 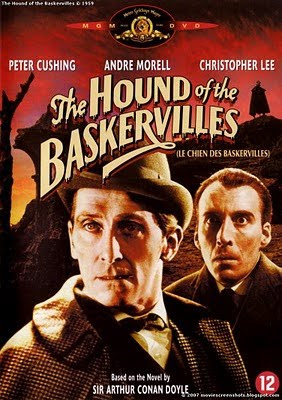 For the most part I love Hammer films, but I have to admit there have been a few I have been disappointed by.  This was not the case with The Hound of the Baskervilles from 1959.  Starring Peter Cushing as Sherlock Holmes, Andre Morell as Dr. Watson, and the young, incredibly handsome Christopher Lee as Sir. Henry Baskerville, Hound is in many ways a perfect Hammer film.  Directed by Terence Fisher, Hound features misty moors, crumbling castles, murder, intrigue, mystery, and a dangerous beauty with the requisite heaving bosom. 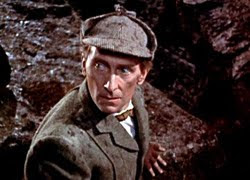 The screenplay follows Doyle's story pretty closely, with a few minor changes and a greater emphasis on the "horror" of the Hound.  Cushing makes a great Holmes, but I have to admit I am not altogether familiar with Basil Rathbone's interpretation.  Cushing captures Holmes enormous ego perfectly.  He is kind of an A-hole but we still admire him. He is courageous, snobby, brilliant, and down-right rude. 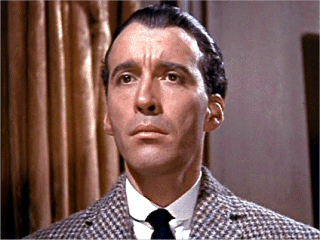 Christopher Lee hits the right notes as Sir Henry, new to the legend of the Baskervilles.  Sir Henry doesn't buy the legend, but he will soon become directly threatened by it.  Cushing and Lee have great chemistry, and if your rent or buy the DVD, be sure to watch the extras.  In Lee's "Actor's Notebook" he speaks quite fondly of Cushing and the depths of their friendship.  It is quite moving.

The Hound of the Baskervilles is a great movie to watch on a dark and stormy night.  Of course, watching it in the middle of summer works as well.
Posted by Jen at 10:27 AM

Ive been dying to see this one, its one of the few Lee Cushing collaborations I haven't seen! I need to finally buy this one, thanks for that review!

I was thrilled with this film! Cushing and Lee are the perfect combo!