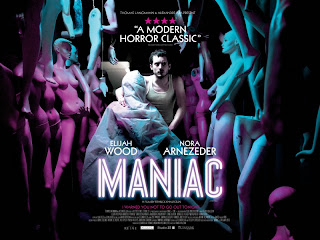 Maniac, directed by Franck Khalfoun, co-written by Alexander Aja, and starring Elijah Wood as mannequin loving Frank Zito, proves many things I long suspected to be true.  Number One: a great, grimy horror movie can really improve my mood.  Two: Elijah Wood is hot in a way I sometimes think is inappropriate, AND he is creepy in a way I just can’t explain. 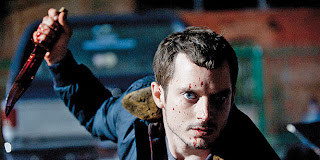 Three: the worst part of a scalping is the sound.  Horrible! 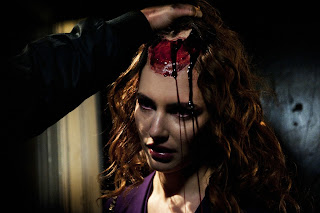 And finally, and perhaps most importantly, number four: Men who wear turtlenecks are probably serial killers and are, at the very least, not to be trusted. 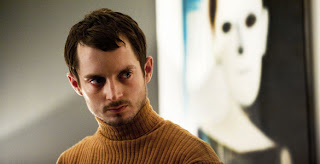 OK, now that I have all that off my chest, let me just say THANK YOU MANIAC!!!  I was in such a horror movie funk and you, you precocious crazy gory movie, pulled me out of it.  Where do I begin with how wonderful this film is?  Let’s start with Elijah Wood.  When I heard he was making this film I thought “Well, that’s weird casting.”  If you are familiar with the 1980 original, you will know that Wood is no Joe Spinell.  (Full Disclosure: I have never seen the original, but I am familiar with it.  Definitely going to see it now.) 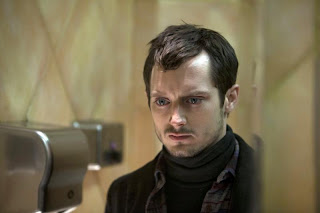 God, another turtleneck.  Frank has some serious issues, I mean, besides his fondness for turtlenecks.  His Mother was a either a prostitute or very loose woman, and young Frank caught her in numerous compromising conditions.  This gave Frank some serious Mommy issues, which he could only resolve by killing young women and using their scalps to "bring alive" the mannequins in his shop.  Everything is going along fine and crazy until Frank meets Anna, a beautiful young photographer who is also obsessed with mannequins. 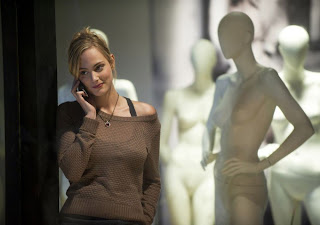 His relationship with Anna makes Frank's already fragile world begin to fall apart.  Despite being all over the posters and the stills from the film, Elijah Wood is hardly in the movie.  It is shot POV style, with the audience seeing everything through Frank's eyes.  We only see Frank in reflections, or the one or two times that the POV is broken.  I was worried this would be a distraction but it is an interesting feature of this film.  It made me think back to my Art History training and all the talk of the "Male Gaze."  Maniac is the male gaze taken to the extreme.  This might be a turn off for those who are sensitive, but really: if you are sensitive you probably should not be watching a film called Maniac.

Back to Elijah Wood.  He is creepy as hell.  Those eyes!  Those turtlenecks!  You can see why Anna might want to associate herself with him, and you can also see why she would want to run the hell in the other direction.  The film has a great look: not New York slimy but LA slimy-- kind of like the film Drive.  The best part of the film is without a doubt the score.  "Rob" is the composer and he or she has created a great techno spooky score that is reminiscent of the work of "Goblin." It adds a lot to the film, especially in terms of suspense and overall dread. 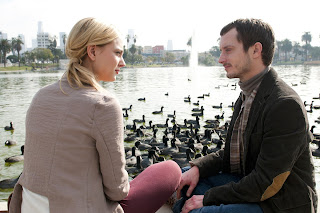 OK, that is like the third turtleneck he wears in the film.  AND he is wearing a jacket with elbow patches.  Almost as creepy as a turtleneck.  Run Anna Run!!!