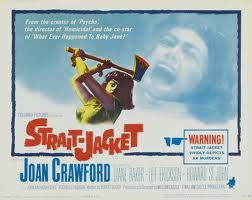 Yesterday while walking along the streets of Palo Alto I actually uttered the words "Oh no a Nerd Herd." See, a group of 8 Nerds were headed up the sidewalk directly facing me.  A Nerd Herd is no small inconvenience.  Nerd Herds do not move out of your way.  You have three options: be crushed against the wall, thrown into the street, or plow right through them.  The third option is the worst because it involves some very awkward interactions including but not limited to: total Nerd paralysis, unnecessary coughing or choking, an unhealthy sense of entitlement (on the Nerds part), and the feeling that at least one of them got a boner (on your part).  I chose to deal with this situation by diving into the bushes and waiting for them to pass.  It was traumatic.  I had to rush home and deal with it the only way I knew how: by watching a Joan Crawford movie. 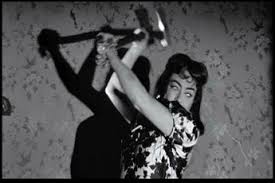 I can't believe I have never talked about this film before on my blog because it is one of my favorites!  I saw it first when I was a kid, shortly after seeing and reading Mommie Dearest ( a book I would re-read about 50 times.  It is one of my favorites).  See, Strait-Jacket was the first Joan Crawford film I had ever seen, and it fit in perfectly with the narrative presented by Christina Crawford in Mommie Dearest.  I mean, Crawford didn't kill anyone with an axe as far as I know, but she certainly screwed up her daughter just like she does in this film.

Strait-Jacket is a "Psycho-biddy" or "Grande Dame Guignol" film, two terms I just learned.  William Castle didn't invent this genre, but he made the best film in it (What Ever Happened to Baby Jane is too classy).  Written by Robert Bloch (yes, that Robert Bloch),  Strait-Jacket tells the story of Lucy Harbin, a wealthy woman who catches her much younger husband (played by Lee Majors!) in bed with another woman.  She does what any woman who is Joan Crawford would do, and murders the shit out of both of them with an axe!!  Her young daughter, Carol, witnessed the whole mess.  Lucy is sent away to a psychiatric hospital for 20 years.  Pretty light sentence if you ask me.  Of course, it was just Lee Majors. 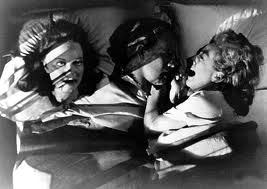 When she is released she returns to her family farm to live with her Brother and his Wife.  Carol, now a young woman, also lives there, and seems eager to accept her Mother back into her life.  She encourages Lucy to get a make-over, so that she looks just as she did 20 years ago.  These leads to some great stuff with a wig and Crawford looking like a "Real Housewife". 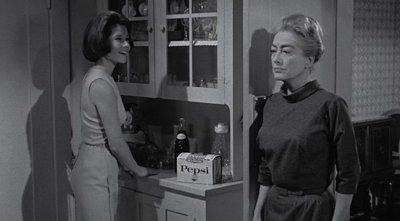 Lucy tries to make a fresh start, but for some reason when she puts on the wig that Carol bought her she turns into a very sad, slutty, drunken fool.  Just like a "Real Housewife."  She even makes a pass at Carol's boyfriend, which has to rank as one of the top 10 most uncomfortable scenes I have ever seen in a film.  Side note: see the product placement for Pepsi in the film still above?  Early product placement!  Crawford was on the Board of PepsiCo (watch the movie Mommie Dearest to see where they try to kick her off!) and she even hired the Vice-President of PepsiCo to act in the film!  He plays Lucy's Doctor.  He had a pretty big role and is terrible!  Even worse than Lee Majors! 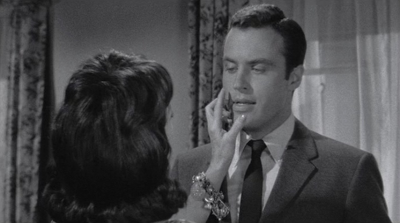 By the way Carol is played by Diane Baker who had small role in Silence of the Lambs.  I love this actress because she super WASP-y and she starred in late night commercials in the Bay Area for her Acting School.  Lucy begins to think she is going crazy.  She sees severed heads in her bed, hears children singing songs about her, and really thinks it is appropriate to hit on her Daughter's boyfriend. I am sure every single one of these things also happened to Joan Crawford.  That is why her performance is so amazing!

Spoiler Alert: Long story short this is a "Gaslight" type situation. People start being killed left and right, always with an axe.  Is Lucy guilty?  Of course not!  Once you kill two people with an axe you really get that shit out of your system.  But who is trying to set Lucy up?  That I will let you find out!!  (Its Carol.) 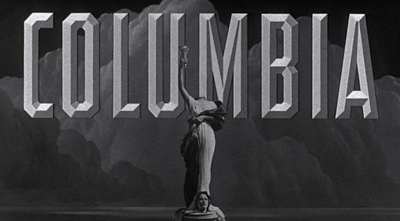 Strait-Jacket is really an early proto-type of the slasher film.  The elements are all there- stupid back story, gore, bad special effects, jump scares, wasps, Joan Crawford.  It is also hysterical, which you would expect from a William Castle film.  Take a look at the end credit above!  I think I connected with this film as a child for many reasons.  First, I love charm bracelets (see the film.)  Second, I hope if I ever have to kill someone with an axe I hope I can do it in a totally blood free way like Crawford does (again, see the film.)  Finally, I really connect with Lucy.  I mean, not the killing part, despite the previous sentence, but with her total disdain for meeting new people and going to parties.  Lucy is a complete introvert.  I feel her pain when she is left to make "conversation" with Carol's boyfriend's parents.  When I am made to make conversation with people I don't know is also usually ends with me breaking things and running down the highway and then returning to kill them with an axe.  (Um, scratch that last part.  That rarely happens.) 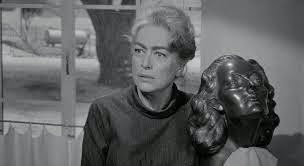 Young and old Joan. Whenever I hang something on a wire hanger I always think of her.  And when I have to clean my bathroom I always destroy a can of Clorox in her honor.  I don't know if all that stuff Christina Crawford said in her book is true.  Many say it is, many, including Joan's other children, say it is a lie.  Only Joan and Christina know for sure.  The fact is, Joan was an amazing actress, who never gave up, even when it was clear to all that her career was over.  I am sure she didn't love being in camp like this, but it is because of these films that we love her.  Thanks for embracing horror Joan.  We are all the better for it.

Pretty much how I feel right now.  Goodbye ghosts, goblins, and ghouls.  Till we meet again...