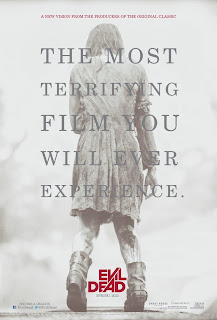 I have no great personal attachment to the original Evil Dead.  I mean, I love it and I want to have Bruce Campbell's babies, but it didn't "bother" me when I heard about the remake, especially since I knew that Campbell, Raimi, and Tapert were involved.  In fact, I was happy to hear that it would be "straight" horror film, ala The Texas Chainsaw Massacre remake. 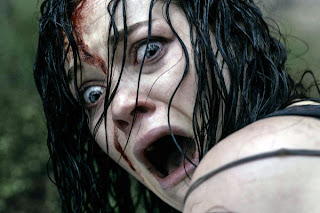 Reviews were mixed, and the film does have some problems, but overall I really enjoyed it.  It's gory as hell, and by that I mean old school gore hell. Jane Levy plays Mia, the Ash equivalent in this film.  Poor Mia is trying to go cold turkey off drugs, so she decides to invite her best friends and her mostly absent brother, David (Shiloh Fernandez: so cute but so forgettable) to a remote family cabin while she goes though withdrawals.  Sign me up!  Doesn't that sound like fun? 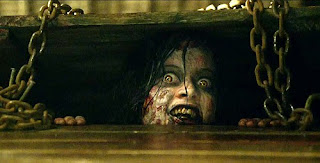 One of the group, Eric, an insufferable hipster, finds the dreaded book which we all know will lead to hellish shenanigans.   Sure enough, poor Mia is soon being raped by trees and turned into a Demon.  Looks like she picked the wrong week to give up heroin! 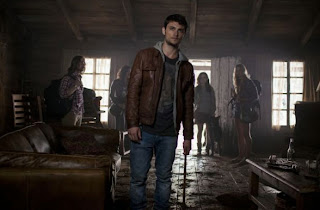 The film then turns into one gory set piece after the other.  Cody Diablo is an un-credited writer on this flick: I don't see her anywhere here.  Not much humor-- quite a lot of gore.  Not that gore is a bad thing... 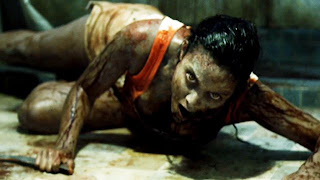 Yes, this film features one of the characters trying to cut off his or her own face.  God Damn I wish this trend would end!!  I can't stand the face cutting shit!!  Also, many people lose limbs.  That doesn't bother me so much, but please don't try to cut off your own face!  I thought I was going to have panic attack during that scene.  Obviously, in some previous life, I either mutilated my own face or was mutilated by someone else.  I can handle most body horror, but not face skinning!  Come on people!!

Jane Levy is really good in this: I think she is going to be a pretty big deal.  The rest of the cast: Meh.  I was not aware and thus missed it, but if you are going to see this film in the theatre: stay through the credits!!  Since I was the only girl in the theatre with a bunch of creepy nerd guys on a Monday afternoon, I hightailed it out of there.  Had I known what was coming I might have risked it! 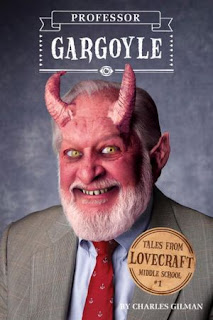 Granted, I don't usually read books aimed at the 10-13 year old market, however, when I stumble upon a book set at "Lovecraft Middle School" I just can't help myself.  When the book also has a nifty "change-o" cover I am even more intrigued.   Feeling the need for a carefree read and longing to re-connect with my inner 12 year old boy self (what?) I read Tales from Lovecraft Middle School #1: Professor Gargoyle.

Robert Arthur is a typical 11 year old boy.  He is starting a new school: Lovecraft Middle School, a state-of-the-Art facility financed by mysterious backers.  Robert's bully, Glenn, has also transferred to this school, a fact that does not make Robert's life any easier.  From day one weird things happen at Lovecraft: rats in every locker, a mysterious library that seems to have a disappearing wing, and a Science teacher, Professor Gargoyle, who has a habit of eating hamsters whole.

Robert's life changes when he finds a very obedient two-headed rat in his backpack and he saves the bully Glenn from a Cthulu like monster in his locker.  He also meets a little girl, Karina, who may be a ghost.  What else would you expect from a place called Lovecraft!

I wish my middle school had demons, monsters, and ghosts.  I might be more well adjusted than I am.  This book was very cute and intended to be the first in a series.  I love any art that introduces horror to children.  This is a good introduction without being overly scary.  Author Charles Gilman must have known adults would read this as well, as there are a lot of Lovecraft in-jokes.  The characters also talk about the movie Poltergeist without naming it.  Go do your research kids!!!  Gilman is giving you a horror education and you don't even know it! 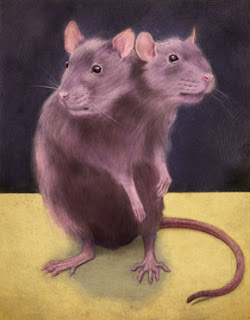 Damn I want a two-headed rat.  I only know one child and she is too young for such a book.  Plus, she only likes dinosaurs.  So I don't know who I am recommending this to unless it's you, dear reader.  If you want a quick read that is totally charming pick this up!