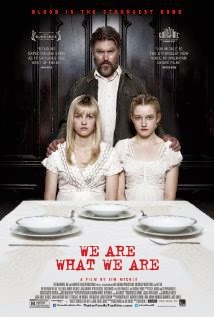 If you ever wondered what it would be like if Sophia Coppola made a cannibal film.... wonder no more!!  May I present you with WE ARE WHAT WE ARE, the American remake of the 2010 Mexican film of the same name.  I never saw the original, but I doubt it is as airy and dreamy as this version.

Rose and Iris are two young, impossibly beautiful girls who are being raised in a family of cannibals.  The cannibalism is a long family tradition, mixed up with religion and survival, carried on by the patriarch, Frank (a very good Bill Sage.) When their mother dies, possibly from Kuru disease (caused by ingesting human flesh, one of the many downsides of cannibalism) it falls to the elder Iris (Ambyr Childers) to kill and prepare the flesh for consumption, which she is not too excited about. Now the actress who plays Iris looks a lot like Reese Witherspoon, which is very distracting but fits perfectly with the Sophia Coppola vibe (although Reese hasn't appeared in a Coppola film to the best of my knowledge, she is blond and innocent looking.  Or at least she used to be before her face got all sharp and she drunk cussed out that cop.) 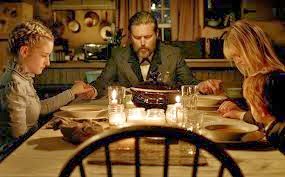 What is great is that this family exists pretty normally in the confines of the small town they live in.  Iris has a jock type cop that has the hots for her, both of the girls go to school, and the family runs a motor home business.  That business is failing however, probably because they eat most of the residents.  The only remaining resident is Marge, played by Kelly McGillis, who is becoming quite the staple of independent horror films.  Good for her. 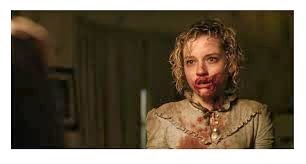 The kindly town Doctor, Doc Barrow (played by my old man crush Michael Parks) begins to suspect that something is very seriously wrong with this family.  His suspicions, coupled with the fact that his own daughter went missing a few years ago, makes the Doc a threat to the family. 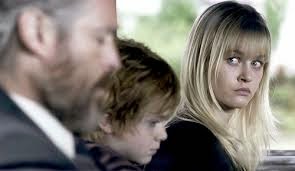 What is a family of cannibals to do in a world that won't accept them?  Well, you will have to see WE ARE WHAT WE ARE to find out.  Not that I am adverse to giving spoilers,  its just that I am tired of writing.  See, I just saw Frozen and its pretty much all I can think about at the moment.  What a damn good movie!!  Could have used some cannibalism however.

Labels: cannibals, we are what we are