There is not much more I can add to the heartfelt tributes coming out today about Horror Maestro Wes Craven.  He was universally loved in the horror community and his impact on the genre is without question.  By all accounts he was a really nice, cool guy who loved what he did.  That sounds like a pretty good run of it to me.

It broke my heart to heart to hear the news.  Wes Craven's films had a dramatic impact on my horror loving soul.  I remember when A Nightmare on Elm Street came out.  First thing I remember is seeing that terrifying poster.  I was repulsed and attracted at the same time.  I was 10 and still slept with the lights on.  Everything scared me: Ghosts, Frankenstein's monster, Vampires, Zombies....I knew these things were not real but that didn't stop them from haunting me every night.  When I finally saw Nightmare I met the new monster who would haunt my dreams.  For months I wouldn't fall asleep without the TV on.  The channel couldn't be on MTV: that was the channel Depp was watching when he was sucked into the bed.  Despite the trauma I watched this film again and again.  To this day it is one of my favorites and although I don't have to sleep with the light on any longer, Freddy still occasionally pops up in my dreams, along with the rest of my friends.

Thank you Wes Craven.
Posted by Jen at 11:00 AM No comments: 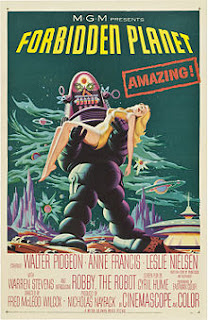 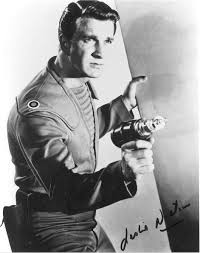 Anyway, Leslie Nielsen was kind of hot right?  This is him as Commander Adams, the Commander of an all white, all male 23rd Century rescue mission bound for the plant Altair IV.  Much like the guilty pleasure "I will drop everything and watch it when it is on" flick Event Horizon, no one has heard from a group of Scientists and researchers that landed on the planet Altair IV 20 plus years ago. Also as in Event Horizon the rescue team discovers that hell awaits them.  I just realized that Event Horizon is a Forbidden Planet remake with 100% more gore and 100% less Robby the Robot.
﻿ 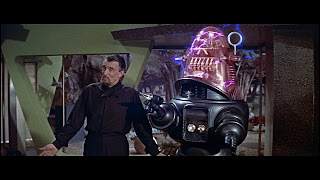 Dr, Morbius, giving off some serious Anton Le Vey vibes, is the last remaining survivor of the original team.  His daughter was born before his wife finally succumbed to the mysterious force haunting Altair IV, leaving Father and Daughter as the only inhabitants.  Well, besides Robby the Robot, whom Morbius built, and some random deer and tigers, who for some reason also live on the planet and that makes no sense at all but just go with it...

Let me just pause this riveting recap for a minute to celebrate this amazing art work created for the film by artists on loan from Disney.  This backdrop is the cemetery, where Morbius has buried his fallen colleagues.  These beautiful, eerie dreamscapes really set the tone for the film, and are so fully realized that even though you know they are matte paintings, you fully accept them as the world of Altair IV.  Some day when I am very rich from writing once a year blog posts about horror films, I will have this painted as a mural in my living room.  As Liz Lemon would say "I want to go there."
﻿ 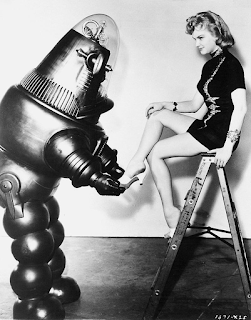 Let me continue this pause to celebrate Anne Francis.  I don't think it was her I loved as much as it was her outfits.  You see, Robby the Robert creates all of her outfits based on Altaira's designs (this is plot point I am not making it up).  My guess is that it must be very hot on Altair IV because Altaira favors hot pants.  As you can imagine this drives the all white, all male rescue crew crazy, and we are treated to a creepy interaction between Altaira and one of the crew before Leslie Nielson swoops in to save her, and then we are treated to a creepy interaction between them.
Back to recap.  If you are familiar with Willie Shake's The Tempest you already know Forbidden Planet.  Let's just say things get strange.  Strange but never cheesy.  This film is not only beautiful to look at, but also really good.  There is a nice sense of dread, a little carnage, and a twist I really didn't see coming because I was totally unfamiliar with The Tempest.  Add a killer all electronic score (the first) by Louis and Bebe Barron plus the truly innovative Robby the Robot and you have a classic that really is a classic.
I was lucky enough to be able to see Forbidden Planet on the big screen at the revival house in my town.  If you have the opportunity to do the same take it.  You won't be sorry.
﻿
Posted by Jen at 10:31 AM No comments: