Resident Evil 5: Yes, another one. 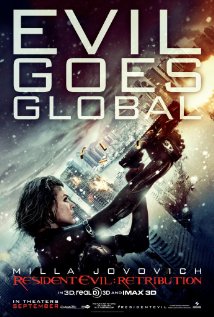 I have mentioned before, in this very space, that I have a deep, abiding love for the Resident Evil films.  I don't know if it is the fact that I like watching hot chicks kick ass, or I am a fan of horrible CGI, or that I love movie franchises that make less and less sense over time, but I love these films!  Resident Evil: Retribution is like that awesome 10 year class reunion that I never had (I actually went to my 10 year reunion and it was so awful I actually left the reunion early, hit the local biker dive bar with the two class rednecks, threw up at the bar in my napkin, and then nearly got arrested by going back the reunion to tell everyone how nothing had changed and I still thought they were all assholes.  Part of this memory is true.) 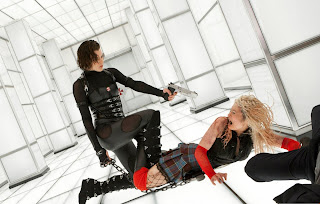 Back to the film.  Plot: Schmot.  Who cares!  All of your favorite characters are back: Alice, Jill Valentine, Rain, the dude from The Mummy, the guy who got lazered into a million pieces.  There are a lot of cool fight scenes and zombies and CGI monsters and everyone gets killed.  Like twice. 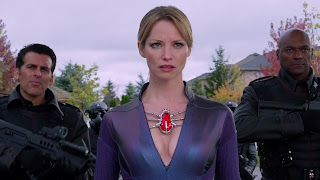 Lets talk fashion.  Ada Wong, apparently a popular character from the video games (obviously I am not a gamer) shows up to rescue Alice in this hot red dress. 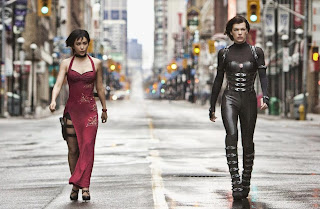 Alice, who barely survived the the boat business from the last film, still manages to find a kick ass leather suit with lots of buckles.  And don't get me started on Jill.  If I had that body that is what I would go for as Halloween, complete with bad bleach job. 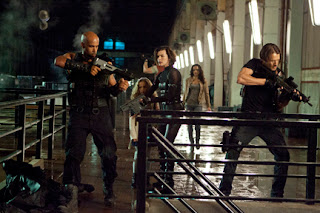 There is a bunch of new characters but they are all awful.  Michelle Rodriguez returns as Rain, and this might be her best performance yet.  That is not saying a lot. 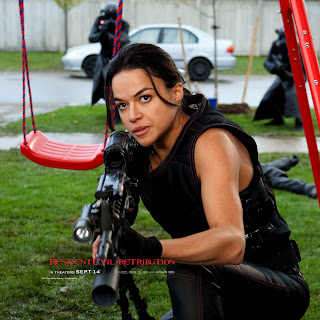 Of course there will be another one.  This franchise might go on longer than Saw.  That is alright with me, as long as they keep the crappy CGI and I must insist: the next film should not make any sense whatsoever!!!  Paul Andersen (the lesser), you were really close with this one.  It is high surrealist art.  Don't hold back next time!
Posted by Jen at 9:17 PM 4 comments:

Exorcist 2: My God Richard Burton is bad in this! 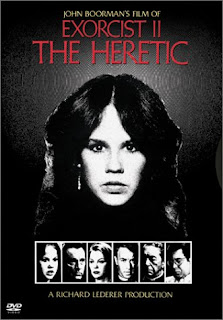 "I am alive and not dead".  That was a blog I once belonged to.  It is now my mantra.  You see, my life has turned into a David Cronenberg film.  And that is not as awesome as it sounds.  For the moment, my particular body horrors have subsided, and I can return to what I truly love: watching crap horror!  I love good horror too, but nothing soothes my soul like a really, really bad horror film.  Ladies and Gentleman: I present you with Exorcist II: The Heretic! 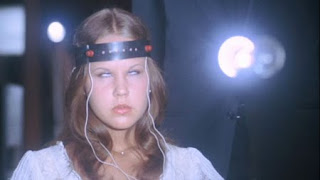 I had never seen this gem but I heard how legendarily bad it is.  The reason I wanted to watch it is because I just finished a book called "Beautiful Ruins" by Jess Walter.  In the novel (non-horror: sometimes even I need a vacation), Richard Burton plays a small but crucial role.  In one passage, the heroine goes to see Burton in Exorcist II and comments on how drunk and bloated he is.  This, combined with the upcoming Liz & Dick on the Lifetime channel has me on a bit of a Burton tear.  I have been trying to watch Cleopatra but I can only get through about 10 minutes a day.

I want to love Richard Burton because he was drunk and Welsh and ridiculous, but I can't get on board.  He reminds me of Gerard Butler who is drunk and Scottish and ridiculous and I also cannot get on board with him.  Like Burton, Butler is making a lot of bad movies.  He is going to really have to step up his game if he wants to reach the heights of this piece of crap. 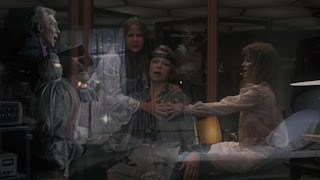 I don't even know what is going on in this film.  Regan (Linda Blair) is now 16 and she looks a lot like Amanda Bynes (I can't wait to see Bynes play some famous, crazy starlet ala Lindsey Lohan as Liz Taylor when she sobers up for 10 minutes.)  Regan is understandably messed up after her experiences but she wears the best clothes!  Really, I couldn't find any images of her cute outfits but they really rock.  Her Shrink, played by Louise Fletcher, who always gives me the hebegebes, has pioneered some kind of "mind melt" method where she can enter peoples dreams or subconscious.  The whole thing is never really explained but anyone can do it, even Richard Burton, here playing Father Phillip Lamont, a priest and acolyte of Max von Sydow's Father Merrin.  The only thing I liked about this film, besides Blair's outfits and the general Burton bloat, was seeing von Sydow play a young Father Merrin.  Yes, I have a thing for Max von Sydow. 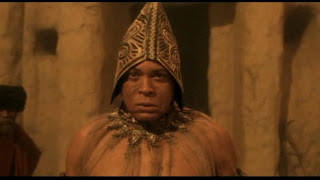 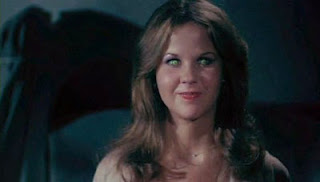 I saw a non horror film today called The Master.  It is a very difficult film but worth the effort.  If I had to explain it to you here I might put a gun to my head.  That is how I feel explaining Exorcist II.  There is really nothing to recommend this film unless you are a:
Really, make your life worth living.  Just watch The Exorcist again and skip this.  My gift to you.
Posted by Jen at 7:49 PM 1 comment:

Two thoughts.  Number One: I am already rooting for each of these kids to die.  Number Two: I am really, really looking forward to this!
Posted by Jen at 6:57 AM 1 comment: 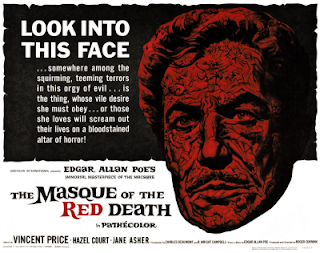 While I was watching Roger Corman's excellent 1964 adaptation of The Masque of the Red Death I kept thinking of Ingmar Bergman's The Seventh Seal.  I don't often put Corman and Bergman in the same thought bubble, but I couldn't help it here.  Corman used a lot of imagery and themes that suggest Bergman.  I was pleased as punch when I ran across an interview in "Cinefantastique" that confirms that Corman was copying Bergman, and didn't care who knew it!  Check out the whole article here.  I bring this up first not only because I think it's cool and weird, but because The Masque of the Red Death is a really interesting, good film with deep dark themes.  Much like Bergman, Corman here is not simply making a horror film, but a meditation on morality, good vs. evil, and religion.  Yeah, that Roger Corman. 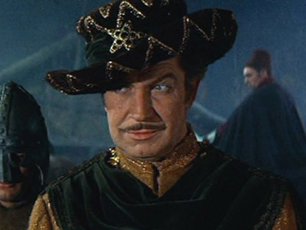 Based on Edgar Allan Poe's short story, with supplemental material taken from Poe's "Hop-Frog", The Masque of the Red Death is the story of Prince Prospero, the Satan worshipping overlord played by the always amazing Vincent Price.  Prospero discovers that the village near his castle has been afflicted by the "Red Death."  He orders the village burned and kidnaps a beautiful young peasant Francesca (Jane Asher).  He also kidnaps her Father and lover with the idea of making them fight to the death.  Prospero is just that kind of asshole. 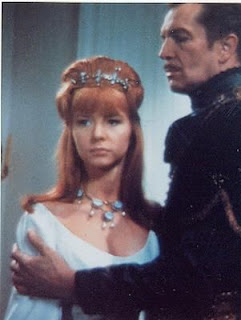 The Prince invites his "friends" to hole up in his castle until the Red Death threat has passed.  He plans amusements for them, including a "Masked Ball."  Meanwhile, he tries to persuade the pure Francesca to embrace Satanism.  Near the end, she nearly does, but the whole thing is interrupted by the arrival of one very uninvited guest... 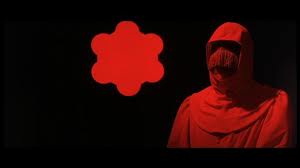 As with most of Corman's Poe adaptations, we don't get to the meat of the story until the very end (a subplot from the "Hop-Frog" is merely filler but still very interesting.)  Other filler includes Prospero's mistress Juliana, played by the lovely Hazel Court, who converts to Satanism and becomes the Devil's bride.  In a crazy dream sequence, she is symbolically "penetrated" by various demons.  It doesn't surprise me that this sequence was cut in England.  I mean, she is really enjoying it!  Too bad her pleasure is cut short when Prospero has her killed by a Falcon!  This movie is that kind of crazy. 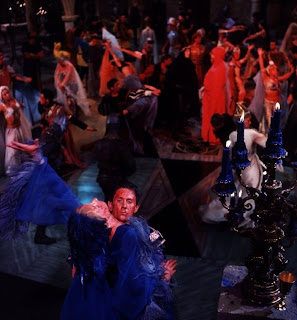 Price's performance is fantastic.  I know he often goes over the top, but I don't feel like he does that here.  He is a man of conviction, even though his convictions are evil.  I almost felt sorry for him when The Red Death comes for him at the end.  His God failed him, and we see the horror of that realization in his face during his death sequence.  We never see what happens to poor Francesca, spared by Death and reunited with her lover.  She would be the definition of PTSD. 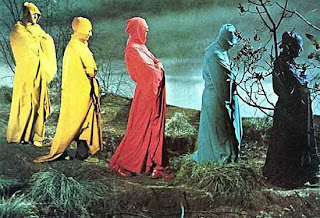 As the film ends we return to Bergman territory.  The Red Death is playing Tarot with a child that Prospero spared in a rare display of mercy.  He is joined by others, presumably plagues and horrors, and they discuss the death and destruction they have left in their wake.   "Sic transit gloria mundi" declares The Red Death.  "Thus passes the glory of the world".  I tell you, I am going to have nightmares about these Technicolor monks!

The Masque of the Red Death is hyper colorful but still Gothic and creepy.  Shot by Nicolas Roeg, who would go on to be a big shot Director himself, this is the most "beautiful" AIP picture I have ever seen.  There is a lot to discover in this film.  The things that go on at Prospero's castle are pretty dark and twisted.  We see nothing, it is all suggested and implied.  I loved it, and I am ashamed it took me so long to see it, and so long to appreciate Corman the Director.