So everyone is saying I must go see Boyhood.  NPR is saying it and whatever NPR says I pretty much go with (I am now 40 so I have to obey NPR.)  Boyhood stars Ethan Hawke.  This fact made me wonder "why are the Gods pushing Ethan Hawke into my life right now?"  I just watched Sinister, I finally saw The Purge, and now this "it took 12 years to make" epic about a little boy.  Why movie Gods?  Why are you making me acknowledge Ethan Hawke?? 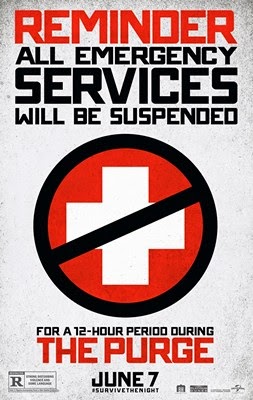 I really have nothing against Hawke per se.  I like Gattaca and the Before films.  Don't even fucking bring up Reality Bites though.  I was of that generation and even I was offended.  Fuck, Singles was a better reflection of my generation than that piece of shit.  And yes, she picked the wrong guy.  There, I said it.  Winona picked the wrong guy.  Hawke was going to turn out to be some shitty True Crime writer or "Home Security Expert" like he is in The Purge.  Hope you are happy now Winona. 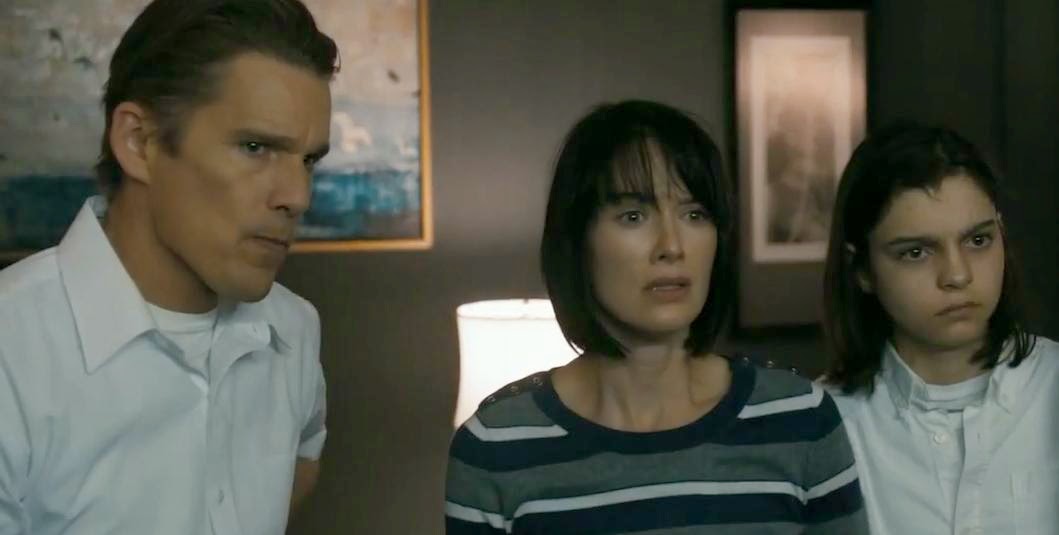 The Purge is a "great idea, horrible execution" film.  So it's the future, and they have reduced overall crime down to 1% by having one night a year be a "Purge" night, meaning all crime is legal.  Hawke plays a guy who has made a fortune selling Purge home security systems to other rich assholes.  He is married to the insanely hot Lena Headey, and I can only assume she married him for the money. 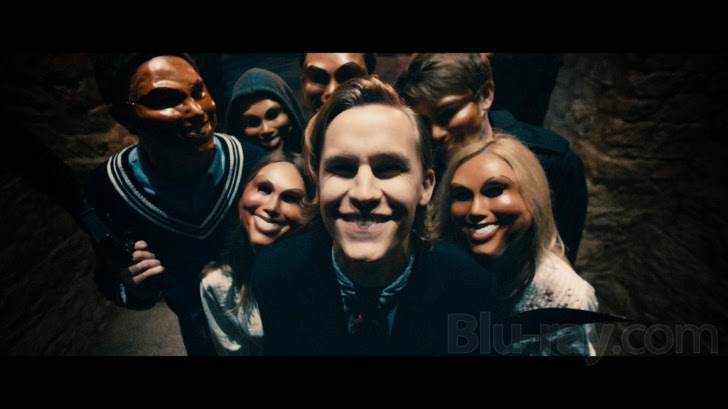 Hawke and Headey have some messed up kids, as you would assume, and they cause all sorts of problems on Purge night.  Basically the bad guys, who happen to also be rich assholes, break into their fortress home and try to "purge" themselves on the family.  Yes, you end up rooting for everyone to die. 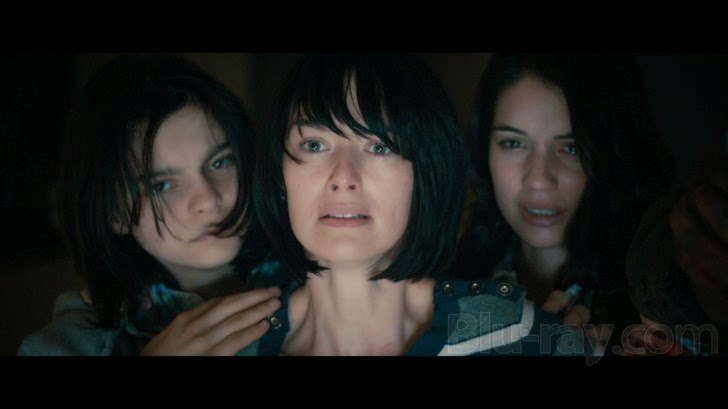 It's a home invasion flick, but not a very good one.  I basically couldn't care less who lived or died.  I was hoping a group of pissed off homeless people would purge the shit out of all of them, but that doesn't happen.  ****Spoiler Alert**** 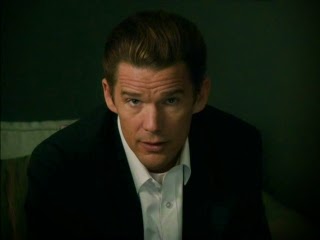 The only good thing is that the Hawke character dies, much like he does in Sinister.  Now if he dies in Boyhood we will be 3 for 3, but I kind of doubt it.  I mean, maybe he dies of Cancer or something. I haven't seen it yet.  He probably dies of Cancer.
Posted by Jen at 7:54 PM 1 comment: 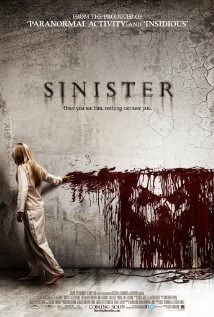 Usually the only thing that keeps me up at night are thoughts of work and the general horribleness of work and how much I hate my work.  This is pretty much a nightly "keep me up" occurrence.  Not that I am complaining.  So happy to be gainfully employed.  So happy to be helping rich people fulfill their need for more shit.  It's really fulfilling.

So, I get pretty excited when it is something other than work that keeps me up.  I'm talking horror people!!!  The last film that kept me up all night was The Ring.  God, that was many, many years ago.  But I didn't sleep a wink.  And I don't even think that The Ring is an especially great horror film.  It makes no fucking sense.  It stars Naomi Watts and some other Australian.  It "insists" upon itself. 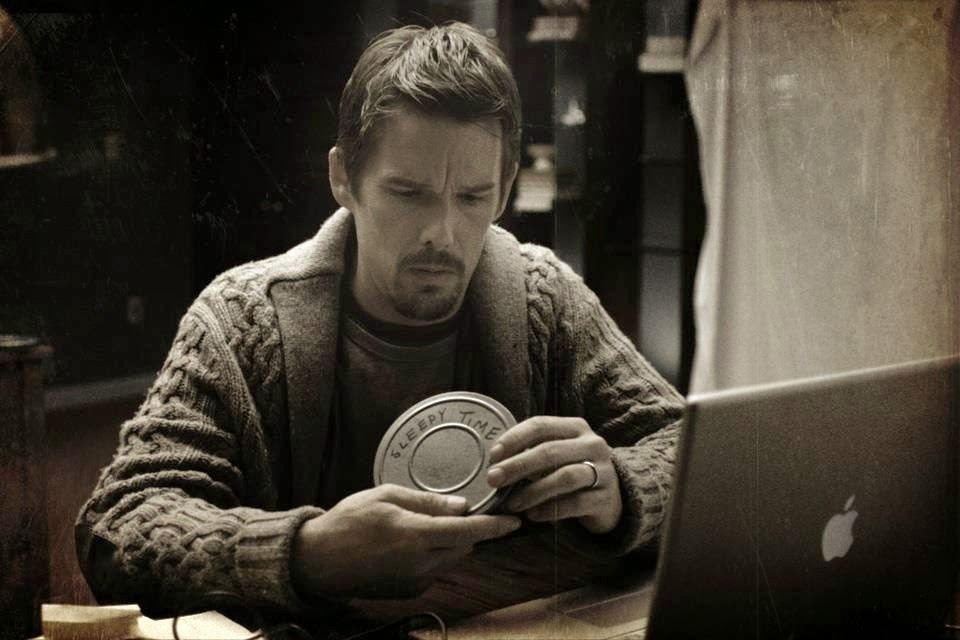 So I was visiting my parents and popped into their local video store and found Sinister on sale for $3.00.  I had heard this was a decent film when it came out, but because I am locked into some kind of "it better be an epic fucking movie for me to pay to see it" spiral I passed.  I couldn't spend $15.00 on Sinister but I sure as hell could spend $3.00. 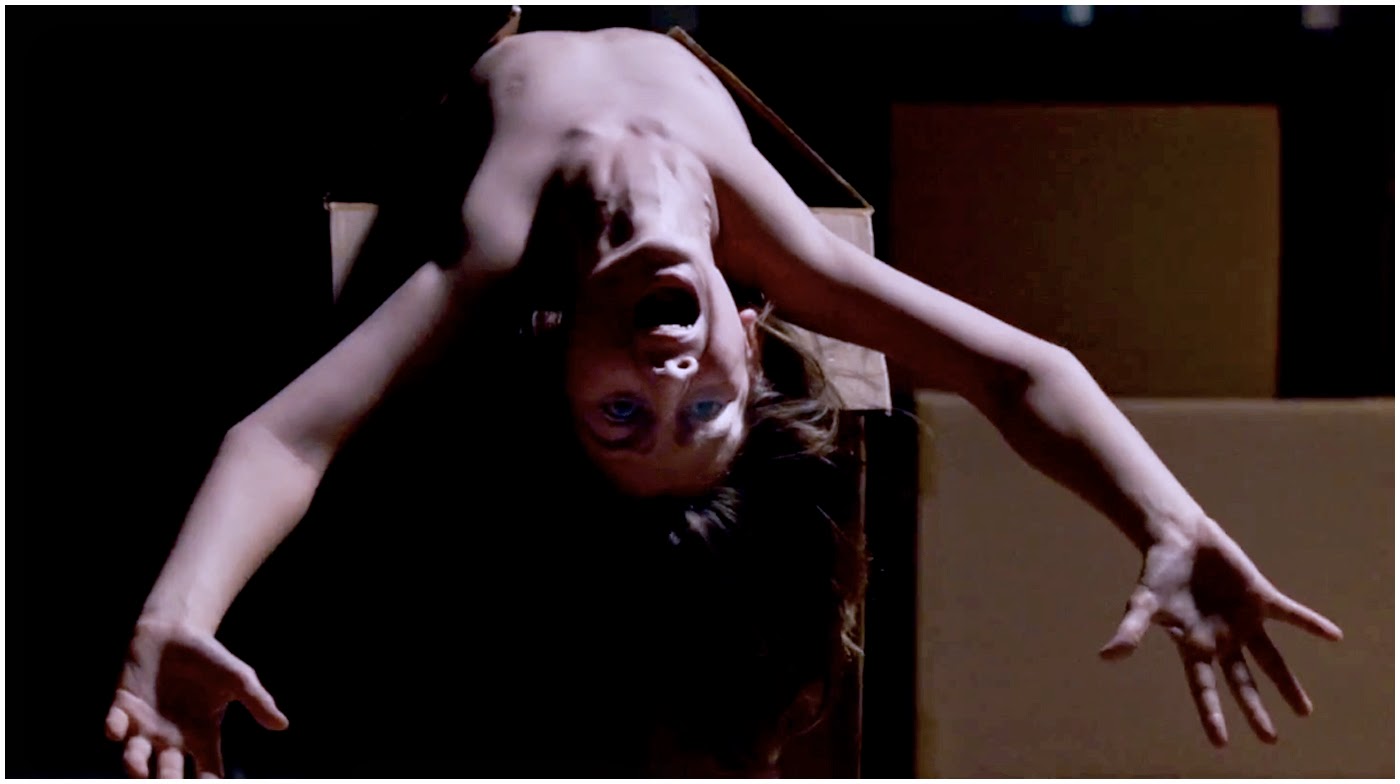 Sinister was directed by Scott Derrickson.  Derrickson directed The Exorcism of Emily Rose, which was the little movie that could.  Then, as the story usually goes, he got offered a chance at the big leagues.  The Day the Earth Stood Still was his next film.  Yes, that one you never saw with Keanu Reeves.  I only mention this because after that shitty experience, Derrickson bounced back with this little gem.  Sinister is the tale of an asshole "True Crime" author played by Ethan Hawke.  If anyone was ever born to play an asshole True Crime author it is Hawke. 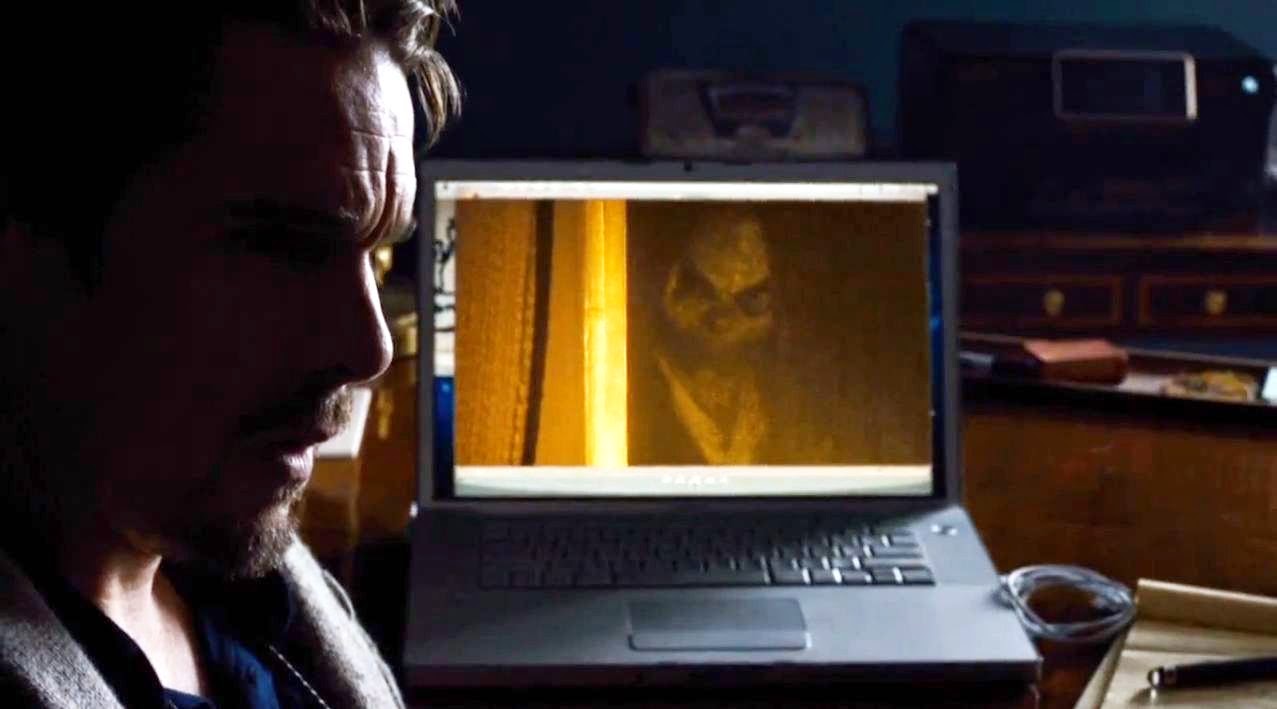 Hawke is desperate for a hit.  He moves his family into a house where a terrible murder took place.  A family was hung from the tree in the backyard.  The only survivor, a little girl, has gone missing.  Hawke moves his family into this fucking place to write his book and he doesn't even tell them the shit went down there!  What an asshole.

Of course freaky deaky shit starts to happen.  Hawke finds a box of Super 8 videos in the attic.  The videos show the backyard murders, as well as some other horrible home invasion murders.  Hawke, being the dick that he is, doesn't report this to the yokel police.  Instead, he launches his own investigation.  And when Ethan Hawke launches his own investigation, you things are going to get weird.

The home invasion genre is one of my favorites.  It is also one of my biggest fears (besides Zombies).  This film has some great creepy imagery, and some effective jump scares.  The image of the family being hung in the back yard is hard to get out of your mind, which is why I was probably up for a few hours more than I should have been after seeing a film starring Ethan Hawke.  Sinister is not the best horror film I have ever seen, but at least it is somewhat original.  And that is all you can ask for now a days.
Posted by Jen at 7:31 PM 1 comment: 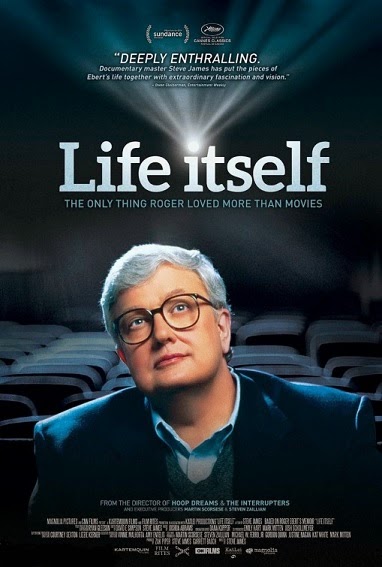 Roger Ebert has always held a special place in my heart.  We share the same birthday, and he was basically my hero growing up.  I grew up wanting to be a film critic, partially because of Roger Ebert.  He taught me a lot about film, as did his partner in crime, Gene Siskel.  Their show introduced me to a world of film beyond the latest blockbuster or the most recent "The Corey's" film (please remember the time period I grew up in.)  It was because of them I learned about Scorsese and Herzog.  It is because of them that I dragged my Father to the city (that would be the best god damn city in the world: San Francisco) to see Hoop Dreams.  I waited anxiously every Sunday to see what films they would give the "Thumbs up" or the "Thumbs down."

Well, I didn't become a film critic.  I became a highly educated retail worker who makes rich people feel better about themselves.  Things don't always work out like you planned.  I have never lost my love of film though.  Sometimes, it is the only things that gets me through.  And I have never lost my appreciation of Roger Ebert, a "populist" film critic who led me in directions which changed my life.

I was thrilled to be able to view Life Itself, a documentary about Ebert directed by Steve James, the genius behind Hoop Dreams.  I expected this documentary to be amazing- I was familiar with Ebert's life story: the struggles with alcohol, his career, his love/hate relationship with Siskel, his marriage to Chaz, and finally, his battle with cancer.  What I wasn't prepared for was the 2 hour cry-fest that commenced in my living room.  It got so bad my dog started barking at me and the cat offered to make me a drink. 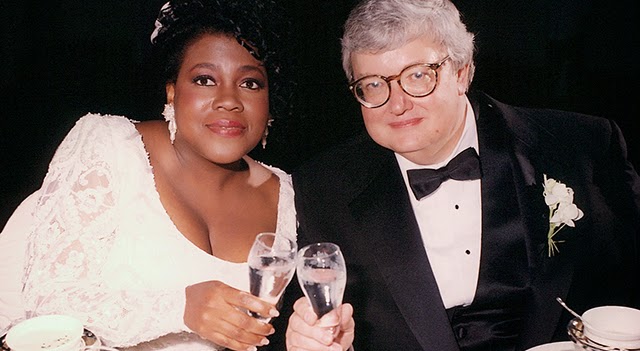 Where to begin?  Ebert wasn't perfect, and the documentary certainly doesn't shy away from that.  He could be an asshole, especially to people who didn't agree with him.  But he loved film, he loved his amazing wife (he didn't marry until he was 50), and he loved his work.  After the cancer took away his ability to speak, he began a highly successful blog, which not only addressed film, but political issues as well.  He never gave up, until he was ready. 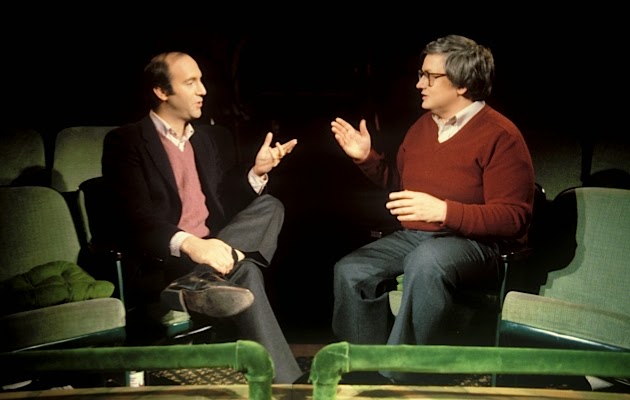 My favorite part of this documentary goes into his relationship with Siskel.  For much of their partnership it was hate/hate.  Siskel knew how to push Ebert's buttons.  Ebert does come out a bit of the "bad guy" in this relationship, which is something that surprised me.  When I watched the show growing up, I admired Siskel, but I related to Ebert. In the end, they had a great respect for each other, and Ebert admitted it was one of the most significant relationships in his life (cue waterworks).  I watched their show every Sunday with my Father, who always encouraged my interest in film.  We took their recommendations as gold, and eagerly awaited their "Year End Special," where they would name their top 10 and bottom 10.  Then we would make sure to watch all of those films.

Ebert was no great fan of Horror, neither was Siskel.  Maybe my love of the genre was a way to "rebel" against these parental figures.  And that is was they were.  I learned so much from them.  And as I grew and mistakenly believed I was becoming smarter and more mature, I rejected them.  When I finally realized that is was ok to love what I love, and no one knew everything, and the whole thing was farce anyway, I came full circle.  Ebert made film accessible to all.  He loved it, even the bad.  I think that is a pretty good philosophy for life itself.

Please check out Ebert's website, mentioned in the film, here.