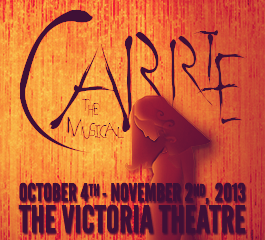 I didn't go see the remake of Carrie.  I am living part time as a hermit and don't get out much.  Paying $15 bucks to see the remake of a film which is already perfect seems like a waste of my hermit time.  Instead the hubby and I went to see Carrie: The Musical at the historic Victoria Theatre.  I don't know that the Victoria is actually historic, but it was the setting for Peaches Christ's excellent film All about Evil.  So it's historic in my book. 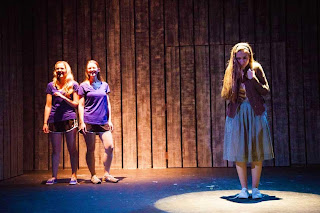 My hubby surprised me with tickets as a pre-Halloween treat (yes, I am just getting around to writing it up.  I have been practicing being a hermit in both life and blog.)  Carrie: The Musical has the honor of being known as one of the biggest Broadway bombs of all time.  It closed after 5 performances.  By all accounts the performances were good, but not good enough.  They all laughed at it.  THEY LAUGHED AT IT!!! 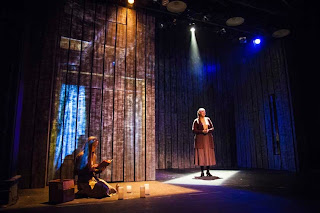 But if found an afterlife in regional theatre and high school productions.  The original songwriters came back and re-worked a few things, and now we have the Carrie: The Musical that I saw last month.  I really should have written this last month.  It is closed now.  A memory.  But I am sure your local high school is going to put in on for their Spring Showcase so keep an eye open.

This cast was very good.  An actual teenager played Carrie.  She is like 16 and goes to high school in Lafayette.  I kept thinking how does she go to school during the day and then play Carrie at night?  Is she really bullied at school for being a theatre nerd or do people think she is cool?  How does she get all that blood out of her hair?  Does she get to go to the cast party or does she need to go home because there is a big test tomorrow?  Why do I write so much better when I am drinking?

The songs on the whole were pretty lame.  None that I will be "humming" tomorrow (my father's litmus test of a good song.  He complains you can't hum today's music.  He also says no one good plays in Vegas anymore even though he hasn't been to Vegas in 40 years.  Love my Da!).

Lets be honest: the only reason to see this is musical is for the final act!!  I was so excited when they got to the prom and it did not disappoint!  Bravo to the production designers or whatever they call those people in the theatre.  Well done.  Lots of blood.  Bitches got what they deserved.  All is right with the world.  Fun was had by all. 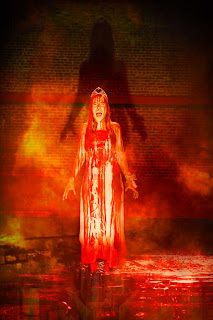 Leave her to Heaven 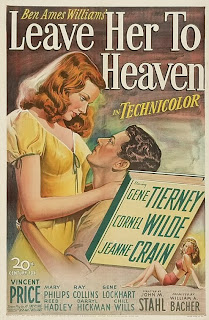 Leave her to Heaven is not a horror film.  The best way to describe it would be "Technicolor Film Noir".  No, that doesn't make any sense, but it works.  Leave her to Heaven stars the beautiful Gene Tierney as Ellen, a socialite with an unhealthy obsession with her dead father.  To say she has "daddy issues" is an understatement.  Bitch is crazy. 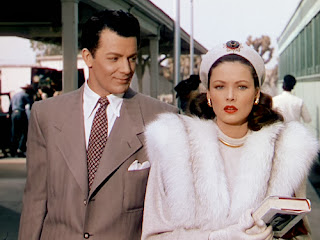 Ellen falls in love with Novelist Richard Harland at first site.  He reminds her of her recently deceased father.  It doesn't matter than she is already engaged to up and coming attorney Russell Quinton (Vincent Price-awesome as always).  Ellen decides she is going to have Richard and doesn't give him (or Russell) much of a choice in the matter.  Before you know it they are married and that's when the crazy starts. 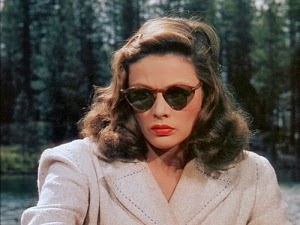 Ellen wants Richard all to herself.  No one else can be around.  No servants, not her family (A mother and adopted sister who know she is crazy, but are so scared of Ellen they don't warn Richard), and not Richard's crippled younger brother Danny.  Richard loves Danny, much more than he loves Ellen. In the best scene in the film,  Ellen lets young Danny drown in a lake.  This sequence is chilling and very well done.  Watching it you know what is going to happen, but you keep thinking Ellen will come to her senses and save young Danny.  Not going to happen.  Ellen tells Richard it was an accident.  He is devastated and although he believes her, he begins to draw away. 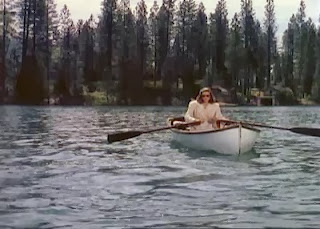 In an effort to win back his love, Ellen becomes pregnant.  Richard is happy again, but once Ellen realizes the baby will take Richard's attention, she throws herself down the stairs.  She loses the baby and Richard starts to become more and more withdrawn... 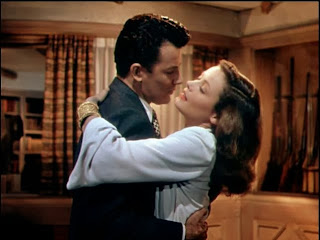 He also starts to fall in love with her adopted sister, who is not cray cray.  As you can imagine Ellen is very unhappy with this turn of events as sets into motion a plot that is her most sinister yet!  And it involves Vincent Price! 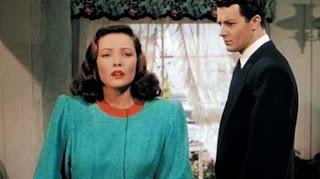 Ellen is not really evil.  She is mentally unbalanced and in desperate need of medication, but she is not evil.  She does evil things which she justifies in her mind as acts of love.  Tierney is incredible in this film.  She is deceitful and clearly off her rocker, yet you feel for her.  She just wants this man all to herself.  Is that really so much to ask?  Creepy and stylish, with melodrama to spare, Leave her to Heaven is definitely a film to check out.
Posted by Jen at 6:08 PM No comments: 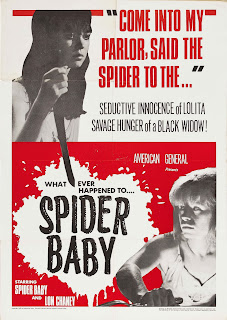 I finally saw Spider Baby.  I had heard about it for so long--that it was weird, gross, odd.  Three things that I really like.  It is also of the "inbred cannibal family" genre which is very near and dear to my heart AND stars Lon Chaney Jr.  Sign me up! 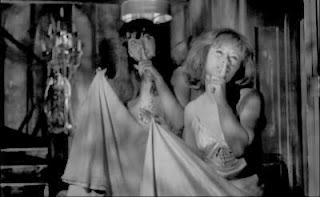 This 1964 oddity directed by Jack Hill languished away in Hollywood purgatory for a few years before it was eventually released (dumped) on the Drive-In circuit.  Lon Chaney and this film deserved better than that.  Spider Baby is the story of the last 5 descendants of the Merrye family- a family cursed with it's own special syndrome that has you emotionally and mentally regressing into an animal beginning in your late teens.  I think I know a few people who may suffer from this very syndrome.  Not naming names but lets just say one of these people signs my paychecks. 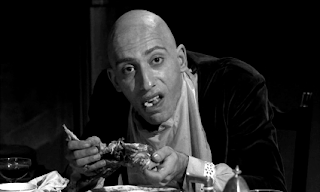 The three most "together" Merryes are Ralph (Sid Haig), a strange man child who doesn't speak but can kill a cat and do some raping like no ones business, and his two feral sisters, Elizabeth and Virginia.  Virginia is the most "murder-y" of the three.  She likes to play a game called "Spider", where she traps you in a web and stabs you with two knives. 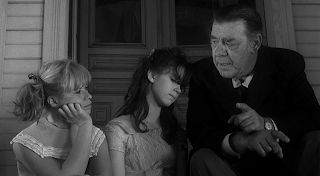 Taking care of the Merryes is my love, Lon Chaney Jr. This is him at his most bloated and alcoholic.  I always see him as Larry Talbot.  He was Talbot: an ordinary man cursed in many ways.  Chaney plays Bruno, the chauffeur who was tasked with taking care of this family.  He loves them and tries to steer them right, but the urge to rape, kill, and eat people is just too strong. 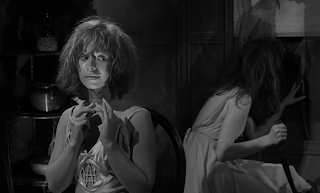 This happy family begins to fall apart when greedy distant relatives show up with their Hitler mustache loving Lawyer, intent on institutionalizing the family and sending Bruno on his merry way (hahahahahahaha).  The family is not having any of it and as you can imagine, raping and killing get underway!

This is an odd little film that is a little scary, a lot silly, and 100% bizarre.  Chaney turns in a very good performance here: you really feel for Bruno.  And he cries!  Lord help me when old Chaney cries.  I just want to give him a shot of whiskey to make it all better.  As a bonus Chaney sings the theme song, which I have included for your viewing and listening pleasure.  Now if you will excuse me I have to go wash my eyes out with soap.