100 Ghosts: A Gallery of Harmless Haunts, or how I stopped worrying and learned to love the ghost of the old woman who haunts my bedroom.

I have not written in a long time, and for once I have an excuse! (An excuse better than laziness or severe depression because I have don't have time to see The Conjuring yet I made time to see World War Z.  What the fuck is wrong with me??).  You see, I am a new mother!
﻿ 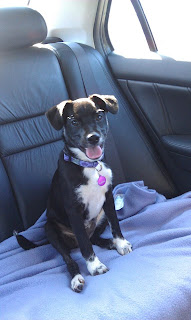 Not of an actual human baby, don't worry.  Another kind of demon spawn: a puppy!! Roscoe is his name-o, and he is 4 months old.  He likes to eat cat shit and then kiss you on the face.  He is pretty awesome, if a little barky.  I mean, this son-of-a-bitch (that would be me) barks at EVERYTHING.  And he especially loves to bark at night when we put him in his puppy crate.  I would bark too if I was confined to a crate every night.  Of course, I don't eat cat shit and hump everything in sight, so it is not really my problem.  I usually don't write such personal stuff on this blog, as a good friend once pointed out (your blog is so "detached"), but I have a reason to share this stuff.  See, Roscoe, through his barking and humping, has summoned the old lady ghost that haunts my bedroom.  Little back story: we only got our kick-ass cheap Palo Alto apartment because the old lady that lived in it died, and my husband works for the owner of the apartment building.  Unfortunately, she did not die IN THE APARTMENT (that would have been killer), but I believe she haunts it.  Joanna (was her name-o) was, as far as I can tell and the mail we still get for her tells me, a very Liberal woman who donated to a bunch of charities and loved Opera.  Nothing wrong with that, except I always feel a disapproving gaze on me when I come home with 6 Target bags filled with junk and crank up Nine Inch Nails.  She is there, and she thinks I am disgusting.  It's OK, I can live with that: my cat thinks I am disgusting as well.
So shortly after we got Roscoe, and he was particularly barky, Joanna made herself known.  We had just turned out the light, and my husband, as is his way, had fallen immediately asleep.  I laid there pondering the deep questions of the universe, such as: What is going to happen to Honey Boo Boo when she grows up? and What happened to that guy that was on Little House on the Prairie and then in that shitty Wes Craven movie with the original Buffy?.  Roscoe was barking up a shit storm.  That is when I heard it: a soft, old lady voice saying: Be Quiet.  Yappy dog shut the hell right up and I said "Thank you Joanna.  Thank you.  I promise I will donate to the Sierra Club."
Which brings me to my review of 100 Ghosts: A gallery of Harmless Haunts by Doogie Horner.  That can't be a real name, can it?  This itty bitty coffee table book is an adorable collection of different kinds of ghosts that can haunt your home.
﻿ 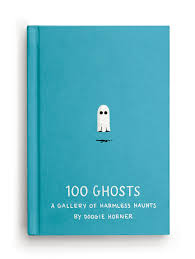 None are like Joanna, but they are just as charming.  Doogie Horner is a stand up comedian and, I assume, amateur ghost hunter.  He is very skilled in identifying ghosts such as this one: 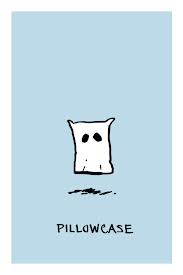 After reading 100 Ghosts I left it on my bed and Roscoe promptly ate it.  We both found it delicious.  If you need help identifying the ghost in your life, I recommend you pick up this tome.
Posted by Jen at 8:52 PM 2 comments: