My very good friend, author and beekeeper Shoshanah Lee Marohn, is writing a book about some adventures we had together in Paris when we were 19 or 20 (I can't quite remember how old I was.)  She asked me to share some of my memories of the trip with her.  Little does she know, or maybe she does, that I have a horrible capacity for memory, and besides knowing that I went, I can't remember a whole lot.  I had a wonderful time.  I smoked a lot of cigarettes.  I was starving the whole time.  We were sexually propositioned a lot.  I forgot to bring a towel.
Perhaps knowing of my shitty memory, Shoshanah asked me to write to her about only one thing: our trip to the Louvre.  Specifically, she wanted me to write about Theodore Gericault's Raft of the Medusa.  At the time of this trip, I had just begun to study Art History, due largely in part to my love of this painting.  Raft of the Medusa has everything: death, duel triangular compositions, cannibalism, and Aunt fucking.  I must of really impressed Shoshanah and her weird little friend that traveled with us with my passion for this painting.  Now, in revisiting this painting, I didn't want to write an essay and do research and blah, blah, blah.  I am only going to write about what I remember about this painting, and why I loved it.  Hope this is what she is looking for.. 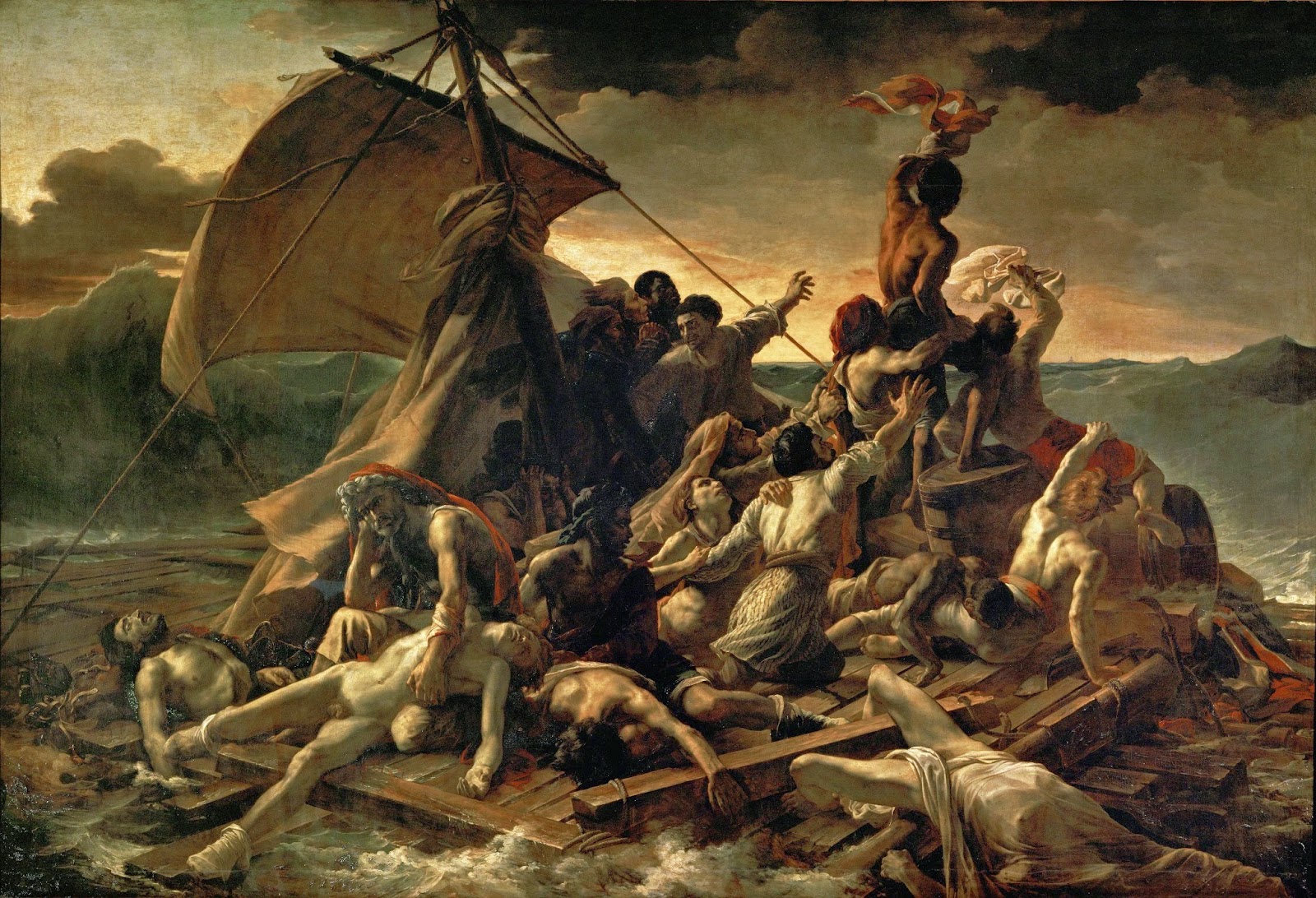 Raft of the Medusa.  Theodore Gericault 1818-19. (also know as: some terrible shit went down on this raft.)
Theodore Gericault (henceforth known as Theo G) was a young French Romantic Painter.  As a Romantic, he rejected the Neoclassical school of David, which concentrated on historical settings and very rigid compositions (all of this from memory y'all!).  Theo G wanted to paint about NOW man.  So he choose one of the most controversial events of the time: the Shipwreck of the frigate Meduse and the 147 souls that were set adrift on a makeshift raft while the Captain and crew sailed away on the lifeboats.  The raft was adrift for 13 days and all but 15 perished.  Many drown, some were killed, a lot were eaten.  A really horrible time was had by all.
Especially horrible is that one of the 147 was a woman.  You never hear about her fate but I hope she screamed "see ya douchbags" and jumped off that raft.  I doubt anything could have been much better. This event captivated the French- not only for the cannibalism and general awfulness (the French were pretty used to awful at this point), but due to the fact that many believed the Captain of the Meduse was unqualified for the position and appointed only due to political favor. 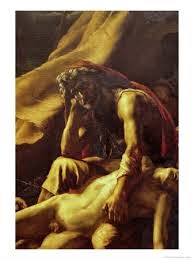 (Fuck this shit.)
The painting was a big success..... in London.  The French were pretty horrified, not so much by the subject matter but by the departure from the Neoclassical.  What makes this not Neoclassical?  Well, for one, contemporary subject matter, and two: its dynamic composition.  This painting is full of motion: your eye is swept along by the composition.  These figures are not statues, but dynamic living (mostly dying) beings.   Gericault depicts the moment the survivors first see the rescue ship.  Most, like our friend above, had given up.  All the horror and destruction of the event are on full display.  Perhaps it hit too close to home for the French.  Perhaps, it didn't hit close to home enough due to the fact that is was displayed very high up on the wall and viewers couldn't see the full impact, a mistake that was corrected when it was exhibited in London. 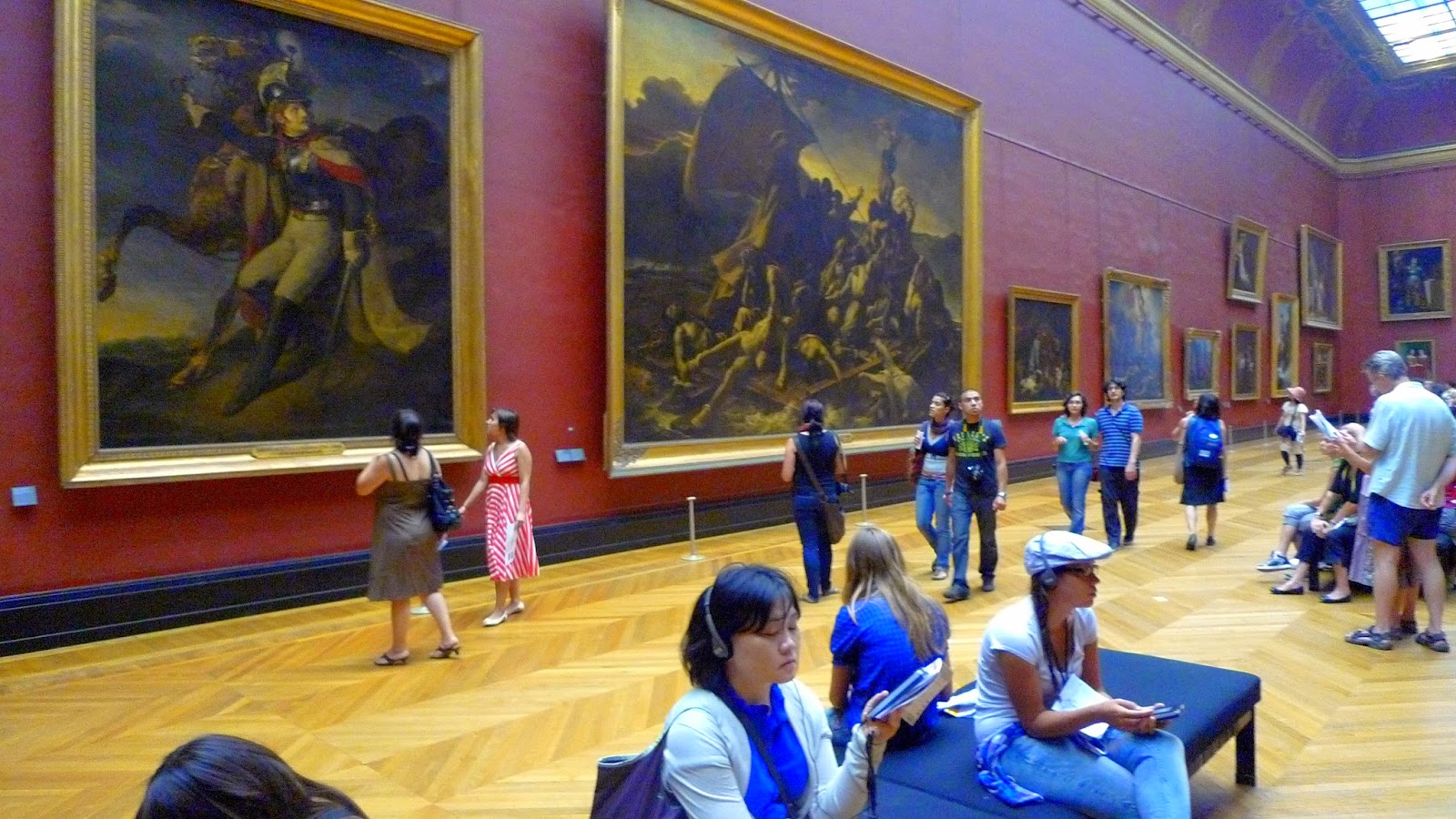 (View in the Louvre)
What else can I say about this painting?  Gericault studied the dead and the insane for inspiration.  He did a full scale model of the raft in his studio.  He was fucking his Aunt and had a child with her and when he had to break it off (because of the whole incest thing) he decided to get over it by painting this depressing thing.  That last tidbit I didn't know about during our trip to Paris Shoshanah, but I thought you would like to know it.
This painting is powerful and horrible and fucking huge.  When you see it in person it is overwhelming.  Most people don't know the story behind it.  I was glad I could share it with Shoshanah and her weird friend.  Now, go read some good writing: check out Exhaust(ed) by Shoshanah Lee Marohn.  Click Order Me below! 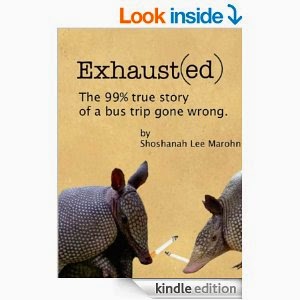