I want to live in "The House that Dripped Blood" 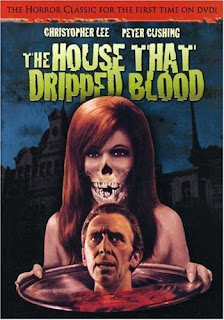 The House the Dripped Blood is a typical Amicus Production from 1970.  The tie that binds these 4 stories together is the wicked house that, although it drops no blood this film, has some evil mojo and makes people do wicked things. 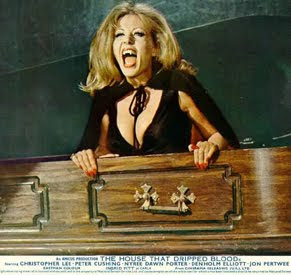 A cop visits a small village to investigate the disappearance of a famous horror actor (Jon Pertwee.)  Both the village cop and the leasing agent of the house warn him that bad things happen to people that reside there.  In the first story, Denholm Elliot plays a horror writer who hopes that the ambiance of the house will cure him of his writer's block.  In the second story, retired businessman Peter Cushing becomes obsessed with a wax figure in a local horror museum. 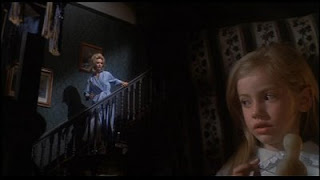 In the third story, Chloe Franks (an amazing child actress) has a terrible secret.  Her Father (Christopher Lee) tries to hide her from the world, but that may lead to his undoing.  Finally, in the fourth story, the aforementioned actor gets a serious lesson in "keeping it real." 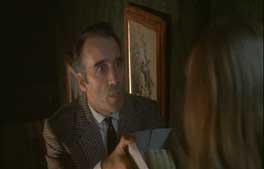 This was a very enjoyable anthology.  I really can't pick my favorite story.  They are all good.  I guess my favorite is the one about the writer who begins "seeing" things.  Robert Bloch (he of Psycho) wrote the screenplay and I am sure he had fun with that particular tidbit.  The house itself is beautiful and creepy, as any house that drips blood should be.  The Tagline is "Vampires,Voodoo,Vixens, Victims!" The film does not disapoint.

Yet another one Im dying to see. Amicus makes fun horror movies, most of the times they were anthologies. My favorite one is Amicus's version of Tales from the Crypt. Highly recommend it!

I loved Tales from the Crypt-one of my favorites!

Did you ever see the sequel? VAULT OF HORROR? its not as good, but still watchable.

I did see Vault of Horror and I agree, not as good but still fun! I love the Amicus films: it's like 3-4 movies for the price of 1!