Rare Book Review: Shirley/We have always lived in the Castle

It has been much to long for the words "Ethan Hawke" to be the first thing you read on this blog.  Sorry about that.  I actually haven't watched a horror film in a while, what with the Simpsons marathon and my new obsession with Doctor Who.  However I have managed to read not one, but two books (and listen to a third which I will mention because it sort of relates to the two I read) and I shall now grace you with my review (what am I a fucking critic?  Here are some not very well thought out observations, typed while getting drunk on a margarita.  Enjoy).﻿ 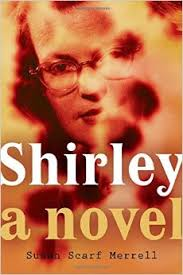 I've been flung down the Shirley Jackson rabbit hole, which, if you are a horror fan, is not a bad place to be.  It started with an impulse purchase of Shirley: a novel by Susan Scarf Merrell.  An interesting blend of fact and fiction, Shirley tells the story of a young woman, Rose, who, with her husband Fred, moves in to the Jackson/Hyman household in 1964 (didn't really happen).  Rose, who is all of 19 and pregnant, is naive, ambitious, and seriously lacking a Mother figure.  Her husband, is Stanley Hyman's teaching assistant (Jackson's husband).  While the men navigate the halls of academia, Shirley and Rose circle around each other.  Rose becomes obsessed with Shirley, to the point of hating Shirley's four children, because they pose a "threat".  She becomes to believe that she could be a writer like Shirley, despite having no discernible talent.  She is a lost little girl who dangerously latches herself to another, much like anti-heroine Eleanor in The Haunting of Hill House.  As with Eleanor, everyone can see how childish and needy Rose is, except herself.  Rose becomes fixated on the plight of one Paula Weldon, a local college student who had gone missing (really happened).  She starts to suspect Shirley had something to do with it.  Shirley Jackson in real life was somewhat obsessed with this case, writing about it twice (Hangsaman and The Missing Girl).

And this is what is so lovely about this novel.  I felt I actually learned something about Shirley Jackson, although this is a fictionalized account of her life.  Merrell's research is immaculate, and she pays homage to Jackson with the very structure of the novel.  It is a tribute, even though it does not paint the best picture of Jackson.  I don't think she would mind.

So after reading Shirley I had to read something by Jackson, so I picked We have always lived in the Castle, otherwise know as the book that has been on my Amazon wish list for 5 years. 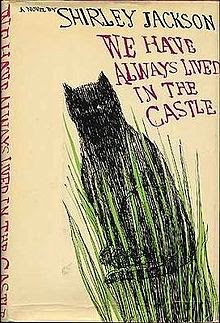 God I love this first edition cover!  That is Jonas the cat, and I swear to God my next cat will be named Jonas.  I apologize for the following names for not being chosen: Cthulhu, Frankenstein, Satan, James Franco, Dracula, Eraserhead, and Ash.  Better luck next time. 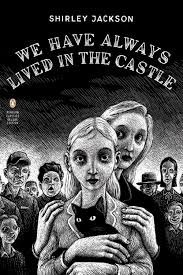 So I am embarrassed I have not read this till now, so for penance I will re-read The Lottery until I am sure I can tell it word for word by a camp fire.  This novel has everything:
Wow, I could go on and on, but the tequila is really starting to kick in now.  Let's just say I couldn't put this shit down!  The narrator, Mary Katherine Blackwood, also known as "Merricat", is a sociopath, but you got to love her.  Yes, spoiler alert, she killed her family, but she is really trying to be good to her remaining sister Constance and her invalid Uncle Julian (who she tried to kill.)  I recently listened to the audiobook of The Sociopath Next Door by Martha Stout, and our dear Merricat fits the description to a T-except for the fact that she is kind of likable.  No, you don't find out she killed the whole family until the end, but you kind of suspect it the whole time.  Yet, she loves her sister and her cat, and what more could you ask for in a totally fucking crazy person.  Plus, she wants to kill everyone in the village, and they all deserve it (see above list # 3).

We have always lived in the Castle was Jackson's last completed novel.  She died three years after finishing it.  Much of it reminds me of the fictional Shirley, especially the sociopathic teenager and the asshole villagers.  I love how things tie together.  Let me finish with some choice passages from Castle, in case you are not inclined to read it thanks to my drunken ramblings.  Enjoy!


“My name is Mary Katherine Blackwood. I am eighteen years old, and I live with my sister Constance. I have often thought that with any luck at all, I could have been born a werewolf, because the two middle fingers on both my hands are the same length, but I have had to be content with what I had. I dislike washing myself, and dogs, and noise. I like my sister Constance, and Richard Plantagenet, and Amanita phalloides, the death-cup mushroom. Everyone else in our family is dead.”
“I wonder if I could eat a child if I had the chance.'
'I doubt if I could cook one,' said Constance.”
“And we held each other in the dark hall and laughed, with the tears running down our cheeks and echoes of our laughter going up the ruined stairway to the sky.
'I am so happy,' Constance said at last, gasping. 'Merricat, I am so happy.'
'I told you that you would like it on the moon.”   ﻿
Posted by Jen at 8:39 PM

Labels: shirley jackson, the haunting of hill house., we have always lived in the castle

I have to read that book when I turn thirteen and hate everyone.