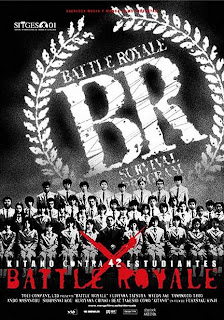 I was lucky enough to see Battle Royale in the theatre when it was first released.  I was living in England and it played at all the major movie theatres.  In the good old States, most people would have to wait about 10 years to see this film, seeing how touchy we are about violence (?).  Considering the film was released shortly after the Columbine High School Massacre, this begins to make more sense.  Battle Royale is about a class of school mates who are shipped to an island and forced to kill each other.  They have 3 days and there can only be one survivor.  If they refuse, their heads get blown off by this nifty little necklace they are forced to wear. 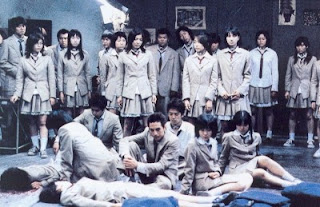 Known for it's over the top violence and brutality, made all the worse that it is perpetuated by children, Battle Royale has quite a reputation.  Honestly, I found it all a little boring and melodramatic.  Perhaps if I was 15 I would have appreciated how hard it is to kill the boy you had a crush on but were too shy to tell him.  As a curmudgeonly 30 plus year old though I found it all a bit ridiculous. 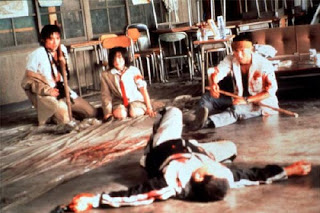 Not saying I didn't love the over the top violence.  It is no wonder Tarantino lists this as one of his all time favorite films.  Some of the performances are very good, especially Kou Shibasaki as the lethal Mitsuko Souma, the quiet girl turned deranged killer. 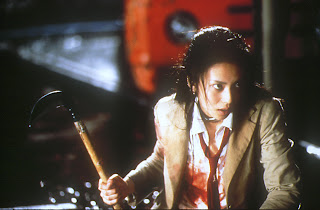 If anything, re-watching Battle Royale some 11 years later made me want to read the 1999 novel upon which the film is based.  There is a lot of interesting stuff in the film, particularly the flashbacks that give more insight into the characters, that I would assume are more fleshed out in the novel.  Give me a few chapters about Mitsuko and I will be happy. There is no comparison between Battle Royale and The Hunger Games to be made, so I am not going to bother.  They are totally different in style, intent, and execution (pun intended.)  The films might make a good double feature however.
Posted by Jen at 10:44 AM