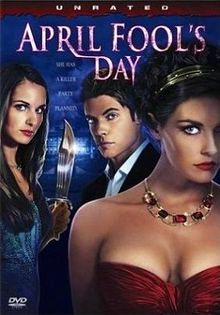 I just can't resist a horror film priced at $3.00.  Especially a horror film that is a remake of one of my favorite slumber party films from the eighties.  The original April Fool's Day came out in 1986, and I must have seen it 30 times at various slumber parties of my youth.  It holds a special place in my heart.  Yes, it's a crap film, but it was my special crap film.  If I watched it today I am sure I would mourn my misspent youth.  I already do that enough so I am not going to watch it.  Instead, I watched this straight to DVD "film" (term used loosely) 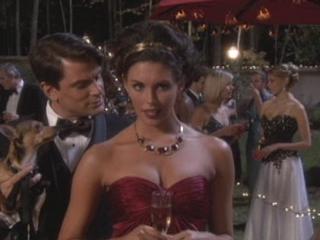 I couldn't even find any good stills from the film it is so bad.  This is a "remake" in name only.  Different characters, different setting.  Michell Altieri and Phil Flores, better known as The Butcher Brothers (great name I have to admit) directed, and Taylor Cole (hot chick in red dress) and Scout Taylor-Compton star.  Cole plays Desiree Cartier, a spoiled Southern rich girl who is thowing a coming out party for Taylor-Compton's Torrance (another great name!  Why hasn't this taken off like Madison?)  The real purpose of this party is to humilate another rich girl, whose name I didn't write down (I think it's Milan.  Lets just go with that.)  See, its April Fools, and they are going to play a prank on her.  The prank goes horribly wrong, and someone dies.  Cut to a year later, and the main players at the party begin to be hunted down by an unseen killer.  Desiree and her brother, Blaine (really?) try to find the killer before they become the next victims!  As you may have alread guessed, there is a twist at the end that you would have to be blind not to see.  It is the same twist as the original film but instead of being awesome (if you are 13) it is lame.
I was sort of interested in seeing this because Jennifer Siebel, Gavin Newsom's wife, is also in it.  She made the right career choice by becoming the Mayor's wife.  The acting is pretty awful and the characters are totally unlikable (I at least like having someone to root for.  No luck here.)  There is no blood and no boobs.  Not that you need either one of those things for a horror film, but if you are attempting a souless cash grab such as this, those things help.  There was exactly one thing I liked about this film.  The main character, Desiree, wears these stilletto heel boots throughout most of the film, except in the scene where she is trying to outrun the killer in the parking garage.  The filmmakers actually put her in black tennis shoes with knee-high black socks so that she could run easier, and assumed the audience wouldn't notice.  You can see her shoe laces!!  Did she change before the chase?  It's great.  It was almost worth the 3 bucks I paid for this film.  Now, off to watch Glee.  Enjoy this trailer for the original film.

All those ridiculous names (Torrance? what were her parents/the filmmakers thinking?) would just make me root harder for the characters to die!