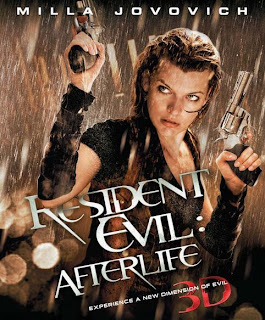 OMFG!  I finally saw a movie!  In an actual theatre!  I wasn't about to miss Resident Evil: Afterlife 3D, a film actually FILMED in 3D (I am of the camp that all others, meaning things converted, suck, with the exception of Piranha 3D which made up for the shitty 3D with lots of gore.)  Where was I?  Yes, I went to go see the newest in the successful, against all odds, Resident Evil franchise.  Why successful against the odds?  Because most movies based on video games suck.  And although many may argue that these films also suck, in my humble opinion, they don't.  I LOVE them.  I love that they are shown on the "Lifetime" network.  I love Milla Jovovich and the awesome outfits she wears.  I love the shitty CGI.  I love guessing what "survivor" is going to die first.  These films are like crack to me. 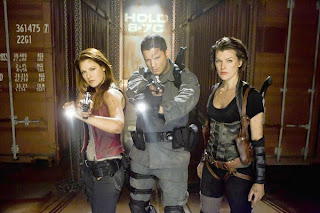 Afterlife picks up where Extinction left off.  Alice and her clones are going after the "Umbrella" Corporation, the evil entity behind all the destruction.  The original Alice loses her powers (a plot point that goes nowhere) and makes her way to "Arcadia" to hook up with Claire and the rest of the survivors.  She finds only Claire, who has had her memory erased.  They take off in search of other survivors and end up at a Maximum Security Prison in the middle of L.A. (as you do.) 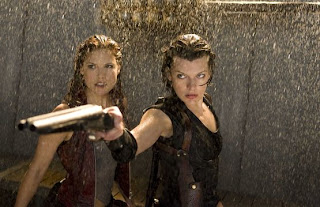 Much the film involves their attempt to escape the prison and the hordes of Zombies waiting for them outside.  Yes Virginia, there are Zombies in this film.  There is one big bad Zombie that carries some kind of ax/meat tenderizer.  He is pretty cool, as are the fight scenes, some of which blatantly rip off The Matrix. But that's OK.  That film came out what... 20 years ago?  Feels like it.

If you love the Resident Evil films and squeal with delight when you see one playing on "Lifetime," you will love this one.  I really did.  And I am so happy that I didn't read much about it before going in.  There is a "surprise" at the end that made me very happy.  Stay for the credits, but only if you have seen all of the other films, otherwise the cameo won't make sense.
Posted by Jen at 5:29 PM