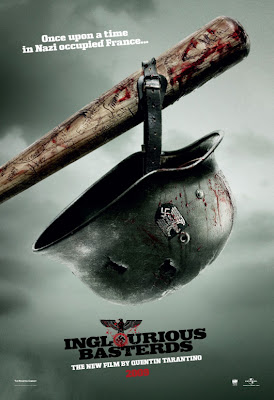 "Basterds and Kittens" would have been a good blog name. I should have named the blog I do for my parents that. Anyway, I have basked in the glory that is the awesomeness of "Inglourious Basterds." Let me say right away that this is in no way my favorite Tarantino flick, but it is pretty damn close. Strangely enough it reminds me quite a bit of "Jackie Brown" but don't ask me to explain that because it is close to lunch and by belly is rumbling. 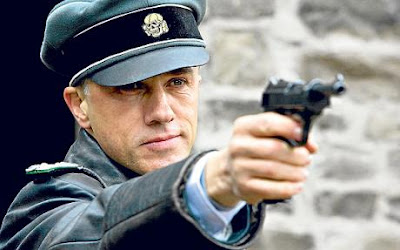 "Basterds" has all the Tarantino hallmarks starting with great performances. Brad Pitt is hysterical as the leader of the Basterds. I am glad he is willing to take on these smaller roles (similar to "Burn after Reading") because he really shines in them. The best performance is by Christoph Waltz as the feared "Jew Hunter." It is no wonder he won best actor at Cannes. He is terrifying, intelligent, good at his job, and, as all great villains are, dangerously enticing. 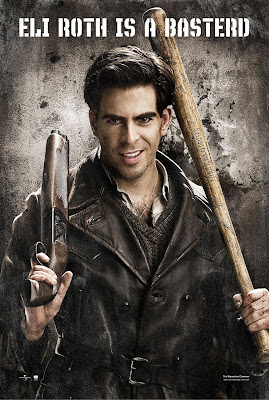 Even Eli Roth is good as the base-ball bat wielding "Bear Jew" (guess what he does with the bat.) Eli Roth might even be growing on me, what with his "Trailers from Hell" commentaries and this flick. Still haven't forgiven him for that shaving scene in "Cabin Fever" though. Gross.
Watching "Inglorious Basterds" is like reading a book- or a fairy tale. The story is told in chapters and the relationships between all the players don't become clear until the bloody, audacious, "I can't believe he is doing that it is so awesome" end. Rumor has it "Basterds" was once going to be a multi-part television show. I could totally see it. Watching the film you want to know more about all the characters, even those that are just on the screen for a few minutes.
So I wouldn't classify this as horror film in anyway, but there is plenty of blood, gore, and head-trauma if that is your kind of thing. It is definitely a geek-out film. It made me as happy as watching this video does....

See, I promised there would be Kittens.
Posted by Jen at 12:11 PM

That video is just too wonderful~! I forgot all about what I was going to say here. Now I want a kitty again. I used to tell Mr. Kitty all my woes, then say, "What do you think?" and he'd say, "I donno." Swear to Jebus!

This is my new "Happy Place" video: when things get shitty I watch this and feel all better.