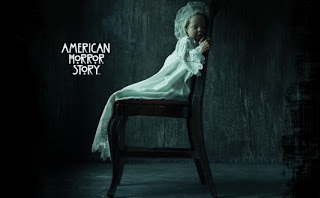 I just finished watching the second episode of American Horror Story.  Although I can't say I am completely on board with this show yet, I know I am going to continue watching it, if only to support "horror" on television.  Which brings me to my first point of contention with American Horror Story: it's not very scary. 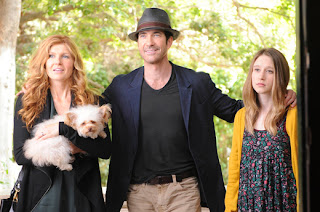 The Harmon's have recently moved from Boston to L.A.  Ben Harmon (Dylan McDermott) is a Psychiatrist who must work out CONSTANTLY.  We see him naked (a lot) and he is ripped!  He also cheated on his beautiful wife Vivien (the amazing Connie Brittan).  Vivien walked in on him having a special "session" with a student.  In an effort to repair their marriage, they move to sunny California with their teenage daughter Violet (Taissa Farmiga).  Oh, did I mention that Vivien had a horrible miscarriage before the affair began?  And that Violet likes to cut herself and is one Cure record away from becoming a Goth wannabe?  In other words, this family is kind of messed up to begin with.  It doesnt' help that the bargain Victorian house they bought has the local reputation as a "Murder House." 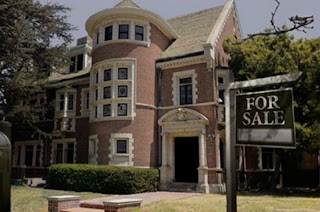 The family moves in and weird things begin to happen right away.  Their creepy neighbor Constance (Jessica Lange) shows up with her Downs Syndrome daughter who has a special gift for sneaking in and out of the house at will. 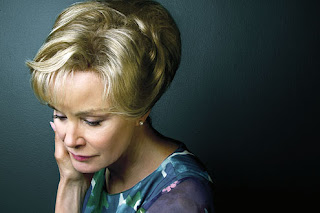 Ben encounters a burned man named Larry Harvey (Denis O'Hare from True Blood) who claims to have once lived in the house.  He also claims to have killed his whole family in the house, and that the house made him do it.  Larry tries to convince Ben that he and his family should leave.  Good advice, considering that during the first two episodes a whole lot of freaky shit goes down. 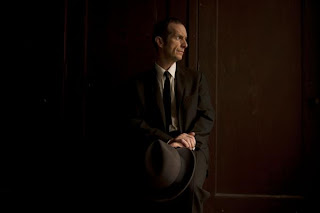 I won't spoil it but let's just say that it includes a lot of masturbation, kinky demon sex, and various homages to just about every horror film made in the past 40 years.  Which brings me back to my first problem with this show.  Not scary.  Copying images and scenarios from other horror films and cutting and pasting them together does not horror make!  And that is basically what is going on here.  It's fun to watch the show and pick the horror films the Producers have cribbed from.  Here is a partial list:
Even the opening credits look like a mash up of that show Oddities and a Nine Inch Nails video.  The music is ripped off of other films such as Vertigo and Psycho.  Because I have seen all of this before nothing is making me jump, nothing is sending chills down my spine.  And it's too bad, because this show has a lot of other things going for it.  Jessica Lange is brilliant as Constance.  She deserves an Emmy for her mysterious yet sympathetic performance.  Same goes for Connie Brittan.  When she was confronting her husband about his affair in the first episode it brought tears to my eyes.  The show looks amazing, and the score, although recycled, it very good.  I don't know how they are going to sustain this story throughout the entire season, and I hope the Producers have an end game planned.  So far this is seeming a little Lost to me.  Let's also hope that the Producers try to infuse the show with a little more originality. Then it might get really scary.
Posted by Jen at 12:18 PM