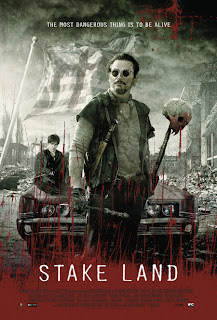 The best horror film of the year was technically released last year, but it only came into my radar a few months ago.  Rue Morgue did an article on it, then Fangoria, then Horrorhound (my personal holy trilogy of horror mags.  Although, if you can find Scream magazine, that one is awesome!  It was only carried at a Border's 3 hours away from my house and that closed.  Yes, I could subscribe but I love the thrill of the hunt in these matters.)  Anyway, the best horror film of the year (in my opinion) is Jim Mickle's Stake Land.  Stake Land is a post-apocalyptic road film where the beasties are vampires.  Now, I am not usually a huge vamp fan, but these vampires are more like feral cannibal mutants.  Correction: there are human feral cannibals in this film.  These vamps are more like fast zombies that can only come out at night.  They have to compete with the human feral cannibals for some sweet meat that looks a lot like Eric from Gossip Girl. 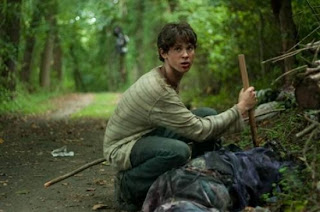 It IS Eric from Gossip Girl!  Connor Paolo plays Martin, a young man whose parents are killed by vampires.  He is taken under the wing of "Mister", a mysterious vampire killer played by Nick Damici.

In this post-apocalyptic world civilization has gone by the wayside.  There are only a few pockets of survivors that get along the best they can.  The survivor's greatest problem isn't the vampires: it's the other humans who have de-evolved.  A group that calls themselves The Brotherhood controls most of the roads.  The Brotherhood are a bunch of white supremacist religious fundamentalists who think nothing of raping nuns and using non-whites as vampire bait.  Not surprisingly, Mister and Martin run afoul of this group and have to avoid them and the vampires on their way to "New Eden."  New Eden is a place supposedly free from infection.  We all know how this scenario will likely play out. 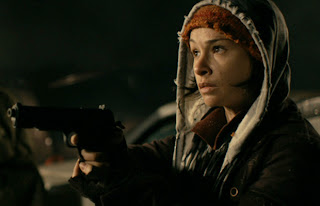 What is amazing about Stake Land is how well all of the characters are developed.  We really care about every single one of them.  Martin is a realistic boy on the verge on manhood.  Mister, for all his toughness, has a heart.  Danielle Harris plays Belle, a pregnant young woman trying to make it to New Eden for her baby.  Her character, in another film, would have stood as a beacon of hope.  She would have made it to New Eden and her child would have symbolized humanity's hope.  This is not that film.  This is not a pretty world.  This is a gloomy, gory, and scary film.  It's message is that humanity will survive, but at what cost? Yep, it's a bit of downer, but I was practically jumping up and down after it was over: it's that good.
Posted by Jen at 8:52 PM