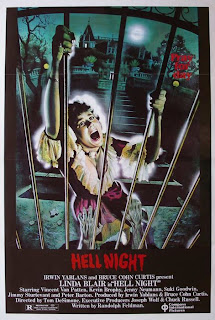 There is nothing I love more than a good old Eighties Slasher.  I almost hate to admit it, but it's the era I grew up it.  I was raised on a steady diet of all types of horror films, but it's the Slasher I return to again and again.  Since Slashers were cheap to make and popular, there are a lot of them floating around.  Most of them very, very bad.  Typically, the crappier the film, the more I like it.  I was expecting Hell Night from 1981 to be awful.  I was wrong (not the first time.) 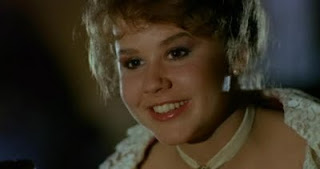 Despite the fact that Linda Blair rocks the worst Victorian up do bun that I have ever seen throughout the film, it is actually pretty good.  A Fraternity is putting it's pledges though a hazing known as Hell Night.  The pledges have to spend the night at the Gothic Garth Manor, site a horrific murder/suicide 12 years prior.  The demented patriarch, Raymond Garth, murdered his wife and children in the Manor.  He then killed himself.  The only problem is that the Police never found Raymond's body, nor that of his youngest son, the mute Andrew.  Rumor has it, Andrew still lives in the Manor. 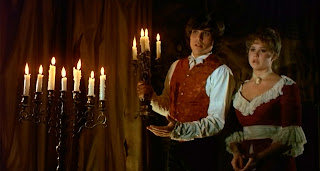 Of course he does!  You know it! Actually it's a pretty good back story, well fleshed out for a cheapo Slasher.  The Fraternity only has four pledges: Marti (Blair), Jeff (Peter Barton, who is so pretty I couldn't stand it.  He looks like a male Carol Alt.  I wasn't surprised to learn he spent the rest of his career in the Soaps), Seth, and Denise are the pledges.  Yes, it is a little weird that this is a male/female Fraternity but go with it! 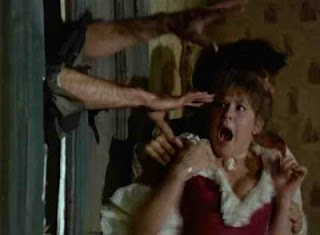 Luckily the Scooby Gang brought drugs and booze to get them through the night.  Before long they start hearing screams throughout the manor.  When they go to investigate they realize that members of the Fraternity have "rigged" the house to scare them.  This sounds like a pretty good Fraternity!  Sign me up.

Everything is going along very well until the kids start really dying.  I mean, they start getting their heads chopped off!  The fun and games are over when the remaining pledges must fight to stay alive from the unseen terror lurking in the house..... 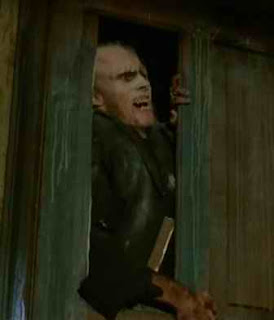 Oh, there you are terror!  Wouldn't you know it, it's Andrew, and he is super pissed.  I mean, he watched his whole family die, and now he has to put up with Linda Blair's whining!  I would go on a murderous rampage too!

Hell Night looks great.  The set design is fantastic.  Andrew is really scary looking, and the Director, Tom De Simone, really knows how to build tension.  Linda Blair's character is kind of an annoying Buzz Kill, but she finally flashes her Final Girl card at the end.  I was in the mood for a "so bad it's good" Slasher and I got a "well, that's pretty good" Slasher.  Lucky for me, there are plenty of bad Slashers out there, and I am sure it won't be long before I encounter my next one.

Warning: Hell Night has no boobs in it, if that is your thing.  Linda Blair has quite an impressive rack, but that hair! Oh God, that hair!
Posted by Jen at 4:15 PM

Ahh! I LOVE Hell Night! I also grew up on 80's slashers and have a soft spot in my heart for this one because I first saw it at a slumber party when I was about 13 and it scared the pants off of me. I have it on DVD, watch it frequently, and will defend it to the death :)