It! The Terror from Beyond Space 1958 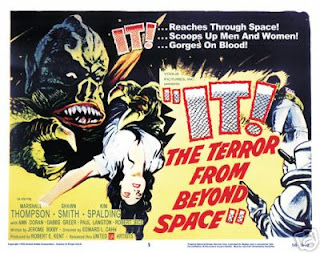 The year is 1973.  Earth has lost contact with the first manned mission to Mars.  A rescue team is sent to investigate.  Their ride is really groovy... 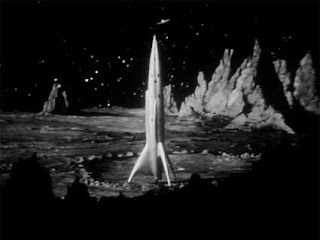 When they arrive they find one survivor, Col. Edward Curruthers (Marshall Thompson).  The rest of the original crew is dead.  One of them has a gunshot wound.  The rescue crew decided Curruthers must have murdered his crew.  He denies the charge, and soon they all discover that the real murderer is It! The Terror from Beyond Space! 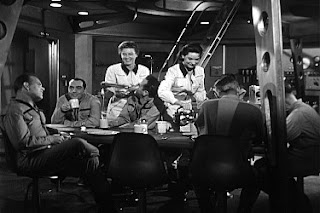 O.K.  This movie is really pretty silly but important for two reasons.  One, John Carpenter called it highly influential to him as a filmmaker.  This doesn't surprise me since It! is basically a siege film.  Carpenter introduced this film and Rio Bravo as part of his hosting duties on TCM.  Rio Bravo is also a siege film, like Assault on Precinct 13, The Thing, and to a certain extent The Fog.  The siege "genre" also happens to be one of my favorites (Night of the Living Dead).  I like it when a group of people are trapped together fighting for their lives, sometimes from an unseen, unknown force.   That is the case with It!.  The clever alien sneaks on board and begins attacking crew members, sucking all moisture from their bodies.  He goes from level to level on the ship, often using the air shafts to move around.  The beleaguered crew are soon confined to one level of the ship, trying to think of a way to kill this unstoppable force... 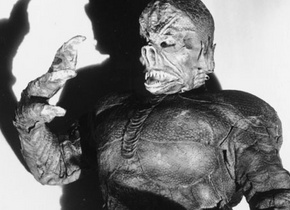 My God this suit is awesome!  Anyway, if this story sound a little familiar that is because it is: it's Alien.  It! The Terror from Beyond Space served as a major inspiration to Alien, right down to the air shafts. 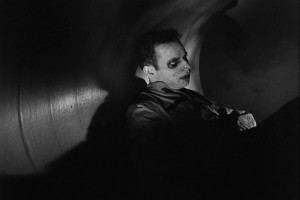 This is the second reason why It! is important, and if you are a fan of Alien I highly recommend you see this.  Plus, it's fun to see doctors and scientists smoking!  Oh, and the female scientists serve the men dinner!  They have a PhD in waitressing!
Posted by Jen at 1:19 PM

Labels: It the terror from beyond space, john carpenter, TCM