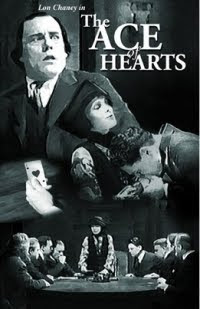 Ace of Hearts starring our honored guest Lon Chaney is a very strange picture. It is like Wanted without the tattoos. Chaney plays Farallone, a mystery man who belongs to a secret society. The sole purpose of this group is to judge and assassinate those they deem to be "unworthy of life" (like a death panel!) A long simmering romantic triangle between Farallone, Lilith (the only female member of the group) and Mr. Forrest (the youngest member) is brought to a boil when Mr. Forrest is selected to carry out an assassination and Lilith, impressed with his courage and valor, agrees to marry him before the deed is done. 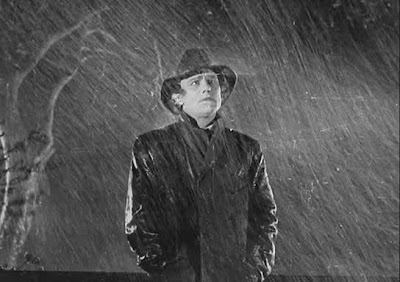 This breaks Farallone's heart- he would have gladly taken Mr. Forrest's place, in both the assassination and Lilith's heart. In a heartbreaking scene Farallone stands outside the newlywed's flat, watching the window all night in the pouring rain. I, of course, fell deep in love with Chaney at this point and I knew that this melodrama was going to bring on the waterworks. And it does, but not before giving you a healthy dose of tension beforehand. See, the member of the group who is to carry out the assassination is chosen at random- whoever is dealt the "Ace of Hearts" must complete the deed. The scene in which this takes place is very well done- I felt my heart racing the whole time.
Farallone, who still loves Lilith, begins to feel his loyalties torn when she comes begging him to save her husband's life. Farallone sees a way to get rid of his rival and have Lilith. Does he take the opportunity? Or does he save Mr. Forrest by sacrificing his own life? I won't tell you but COME ON! It's a Lon Chaney movie! How do you think it will end?!!
This is the first film that I can remember seeing where Chaney does not wear makeup or distort his body in any kind of way. He is still amazing- although he does over-act in some scenes. You get used to watching this sort of thing the more silents you see. Although this is a thriller/melodrama, there is a little gore at the end which is always a nice touch. Interesting fact: the actor who plays Mr. Forrest, John Bowers, did not make the transition into talkies very well. In fact, it killed his career. He ended up committing suicide by throwing himself into a lake. The original A Star is Born is based on his life. You are now ready for "Trivial Pursuit: Silent Film Edition."
Posted by Jen at 7:14 PM

An excellent, informative review. Thanks!