The Hunchback of Notre Dame 1923 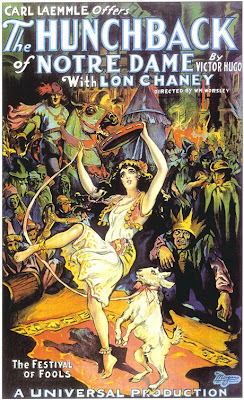 I love this movie but it makes me cry every single time. Even more so than with The Phantom, Chaney created the sympathetic "monster." Quasimodo is a poor, misunderstood and feared man/child who lives at Notre Dame under the protection of the Archdeacon Dom Claude. Dom Claude's evil brother, Jehan, uses Quasimodo to his own wicked ends. Jehan is in love with Esmeralda, the beautiful gypsy who dances at the "Festival of Fools." 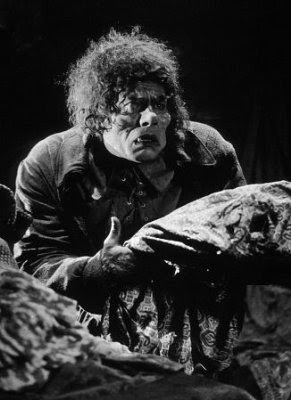 Jehan enlists Quasimodo in an attempt to kidnap Esmeralda, but he is stopped by the dashing Phoebus, a rich rogue whose heart is also captured by the beautiful Esmeralda. So far this sounds like an episode of Gossip Girl. 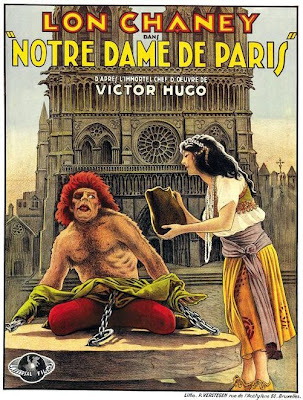 Quasimodo is captured and punished- whipped in the square for all to see. Esmeralda takes pity on him, the first to do so besides Dom Claude. This is an amazing scene... under all of that makeup--and chained to a wheel, Chaney is still able to convey the emotions of fear, relief, and gratitude. He only has one eye, yet he is able to convey all of these emotions. This may sound strange, but Chaney's performance as the Hunchback is almost joyous. Yes, there is sadness and fear and pain, but he inhabits the character so fully that, during scenes such as the bell-ringing, he is able to convey the simple joy of the one act that brings this character happiness. Really incredible. 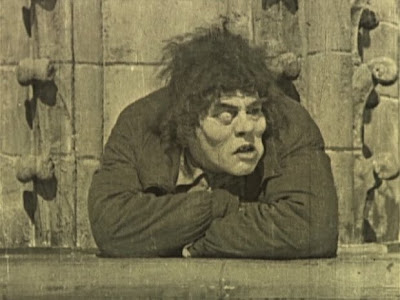 OK, long story short (I am not a fan of recounting entire films-watch it!!,) Esmeralda gets set up for attempted murder and is sentenced to die. Quasimodo rescues her and takes her to Notre Dame. The members of the Paris Underworld, led by Esmeralda's creepy foster father Clopin, attempt to storm the Cathedral. This leads to the showdown between Quasimodo and the world that shunned him.
I hope I am not giving anything away by telling you that Quasimodo dies at the end. This is a Lon Chaney movie after all- he dies in almost all of them! The part that gets me about this film, that brings on the waterworks, is when Quasimodo rings his own death bell. The only witnesses to his death are Dom Claude and a Parisian Poet- Esmeralda by this time has left with her lover Phoebus.
This role, along with The Phantom, is really classic Chaney. The Monster with the heart- the idea that both good and evil can exist in the same soul. It would have been really cool to see what he would have done with Frankenstein's Monster.

Maybe some day to watch I will, but C. Laughton's Quasi--the l939
version--rings true for me: from
the acrobatic bell-ringing to the
tortured cries of "Sanctuary.....
sanctuary." Cried, I did, at the end. Yep, a true softie here.