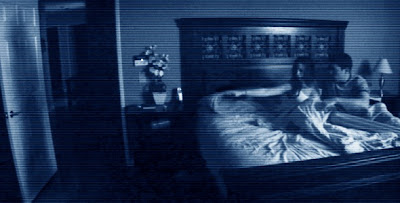 I really wanted to wait 24 hours before I wrote about this film, but I also wanted everyone to know how cool I was to go see this as a matinee on a Tuesday afternoon in a theatre full of stoners. Seeing a flick with a bunch of stoners is a mixed bag. If you are not enjoying the film, the constant stoner commentary can be quite amusing. If you are enjoying the film, it can be annoying. Since I have mixed feelings about this film I also have mixed feelings about the stoners who watched it with me. During the boring parts (there are plenty) they were really funny, and during the scary parts (also plenty) I wanted to punch them. They were killing my scared buzz. Long story short: Don't go see a scary movie on a Tuesday afternoon by yourself because your companions will be stoners and the requisite creepy looking dude.
OK- I am not crazy about this film but I did like it. I wanted to love it and be really scared. Good news: it is scary. The last 5 minutes literally gave me chills and who knew ending credits could freak you out. But it is a long build-up to the scary stuff. We really get to know this couple, Micah and Katie, and their really boring decorating tastes. Something funky is happening to them while they sleep, and Micah decides to set up cameras all around to capture some "Paranormal Activity." Turns out Katie is being haunted by something, and it might not be a ghostie. She has been haunted by this thing since she was 8 and she neglected to tell Micah about this. Understandably he is pissed, but being a kind of jerky guy, he doesn't really take it seriously. When shit starts to get real (what movie is that from? I love that phrase!) Micah tries to get rid of the "entity" himself, even bringing in a Ouija Board. Any 13 year girl will tell you that Ouija's are bad mojo.
I guess the thing that kind of bothered me about this film is I didn't believe in the couple. And it is not just because I don't like what they did with their house. They appear to be rich- even though he is a Day Trader and she is a student. He must be good at his job but the problem is: He never works! Neither of them work or leave the house! Small complaint. Didn't sour me on the film and like I said: the ending is scary! But the real test is: Was I scared going to bed that night? See, this film plays on a very primal fear: how vulnerable we are when we sleep. So, after reading a little Clive Barker (to get me in the mood) I turned off the lights and kicked the cat off my lap and waited for the scary to come. It came a little. I thought about the film a little but it didn't prevent me from falling asleep (the last films to do that were The Ring and Blair Witch.) And no nightmares! Not even Zombie ones.
So I don't love this film but I recommend it for the last 5 minutes unless you are a Blair Witch hater. Then don't bother. I think Saw 6 is coming out soon. Go see that.
Posted by Jen at 8:00 PM

I agree, it could ave been plenty better. Andria and I went and saw it last week. I think you had it a bit better though, we didn't have stoners. We went to a later night showing and got a bunch of college kids who couldn't shut the hell up! The one sitting a few seats down from Andria kept talking about how scared she was and everyone was screaming and going on in all the creepy parts, they were loud and obnoxious and I would have LOVED to have stoners instead of them! As for the movie, I thought it was creepy as hell but it didn't make me jump or get scared even once! To that I have to boo it. There were the slow areas which I didn't really mind but I think that they could have delved a lot more into Katie's possession instead of the few times she ever did anything and the ending part. It could have been much, much better. I did, however, like the movie even though I think they could have done a lot more and still kept the authentic look to it. By the way... You are right about the credits, no beginning or ending credits was kinda freaky!