The She-Beast: not starring Lon Chaney 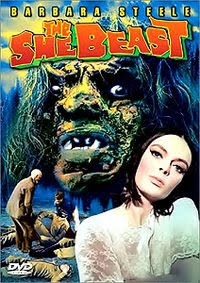 I know I am supposed to be about Lon Chaney this month, but I must make a detour into the land of The She Beast. This film was directed by Michael Reeves, and I would have devoted a whole month to him had he not died after directing three films. I could devote a weekend to him. Anyway, I fell in love with Reeves after seeing The Witchfinder General and I was very happy to track down The She Beast, which is his first film (as a director, he worked as an assistant on a couple of other films.)

She Beast stars Barbara Steele (not pictured above) and Ian Ogilvy as a newlywed couple honeymooning in Transylvania (I tried to get my husband to take me there for our honeymoon to no avail.) They decide to stop and stay overnight in a cursed village (is there any other kind?) There they met a peeping tom/pervert/rapist Innkeeper, Count van Helsing, the world's worst truck driver, and a WITCH!!! Well, really the ghost of a Witch. Barbara Steele gets possessed by the ghosty Witch and proceeds to kill the descendants of all the villagers that killed her 200 years ago. They killed her by nailing her to a chair and then dunking her in shallow water over and over and over again. This is actually the funniest part of the movie. When they dunk her in the water her head doesn't even go under. She would have died from her wounds thanks to being nailed to the damn chair before she would drown. Why bother with the dunking park? 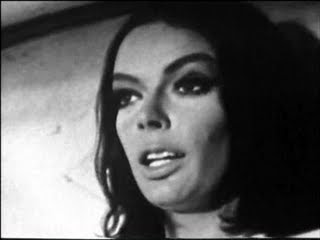 Anywho- Ian Ogilvy and the descendant of Van Helsing team up to stop the witch and turn her back into Barbara Steele. This involves a really out of place Keystone Cops car chase and, when they do capture the Witch/Barbara Steele, re-doing the dunking business again.
I really enjoyed this film, even through the print I had was so bad it was, at times, unwatchable. I really loved the two leads, Ian Ogilvy and Barbara Steele. I get why people are obsessed with Steele, she is really beautiful in an odd, Angelina Jolie kind of way. The film itself is not "scary" in anyway (most of this stuff isn't) but it has a good story and stays on track (except the weird car chase business- the humor that is sprinkled throughout the film doesn't really work so well. Is the Innkeeper supposed to be a funny pervy kind of guy or a scary rapist? He is both! Yeah, I am confused.)
Now, back to regularly scheduled programming......or maybe a few more thoughts on Paranormal Activity. Talk about having trouble staying on track....
Posted by Jen at 7:41 PM