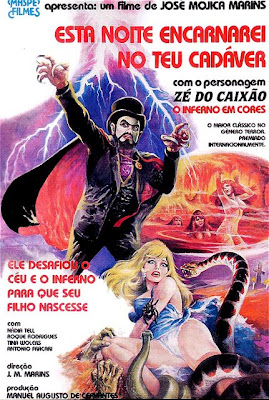 Yeah! I finally got to see This Night I will Posses your Corpse, the sequel to At Midnight I'll take your Soul (thank you IFC.) Both films are directed by and star Jose Mojica Marins, the legendary Brazilian horror icon. Legendary because he created "Coffin Joe," the Brazilian equivalent to the Boogyman. Coffin Joe is an Undertaker with a thing for long nails and a peculiar "Superior Race" philosophy that is just bound to get him in trouble. See, Coffin Joe believes that his spawn will be start of a new, "perfect" race, and through his child he will achieve immortality. This belief, and the desire to have a child, governs everything that Coffin Joe does; which includes kidnapping, torture, rape, and murder. He also likes to get drunk and act like a major asshole. 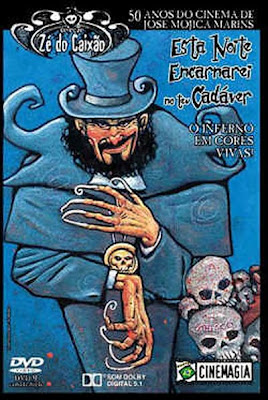 Part of his plan involves finding the perfect woman to bear his child. She must love creepy guys with bad teeth and long nails, and completely lack any morals. After miraculously "recovering" from the events in the first film, Coffin Joe returns to his small village and proceeds to kidnap a number of young women to find his perfect mate. The villagers suspect him of this crime, but are too afraid of the pervert to do anything about it. I would be afraid of a 5ft guy with a big hat too. Considering the fact the Coffin Joe's philosophical belief system is full of holes, it should come as no surprise that the method he uses to "pick" the perfect woman makes no sense at all (see video below.) It does make for a pretty cool sequence however. 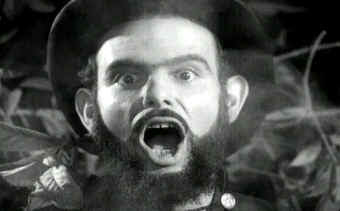 On and on this movie drags until he finds his perfect woman, a brain dead debutante named Laura who will put up with his bullshit. He impregnates her (finally) but soon discovers that he killed a pregnant woman (one of the kidnapped chicks) and begins to lose his mind (already lost it buddy.) See, Coffin Joe, or Ze do Caixao as he is known, holds children in the highest esteem. They are perfect in his twisted mind, and the fact that he killed one brings on the crazy. This manifests itself in an AWESOME Wizard of Oz type dream sequence set in HELL!! This is by far the best part of the film and for some reason it reminded me of hanging out at Chuck E Cheese as a kid. Remember the "Velvet- glow in the dark room?" The hell sequence reminded me of that: I don't know why. Can you believe they had those at Chuck E Cheese? They would never have them today.
Back to the film: Laura dies and takes his perfect child with her. The villagers grow some balls and decide to go after Coffin Joe. Joe kills some guy with his feet (its awesome!) makes everyone listen to his crazy ramblings, denounces God numerous times, and then is finally murdered by skeletons. Really, this is what happens. All in all, this film might be one of the greatest films of all time (if you are drunk or stoned.) If you can find it- watch it!!
Posted by Jen at 9:41 AM